If you want good war films, check these out. You won’t find Saving Private Ryan here, nor any of Oliver Stone’s screeds against Vietnam (Platoon, Born on the Fourth of July, etc.). I used to like the Civil War film Glory, but that one hasn’t aged well. For more recent efforts, I found American Sniper and Dunkirk to be overrated. The following are superior. 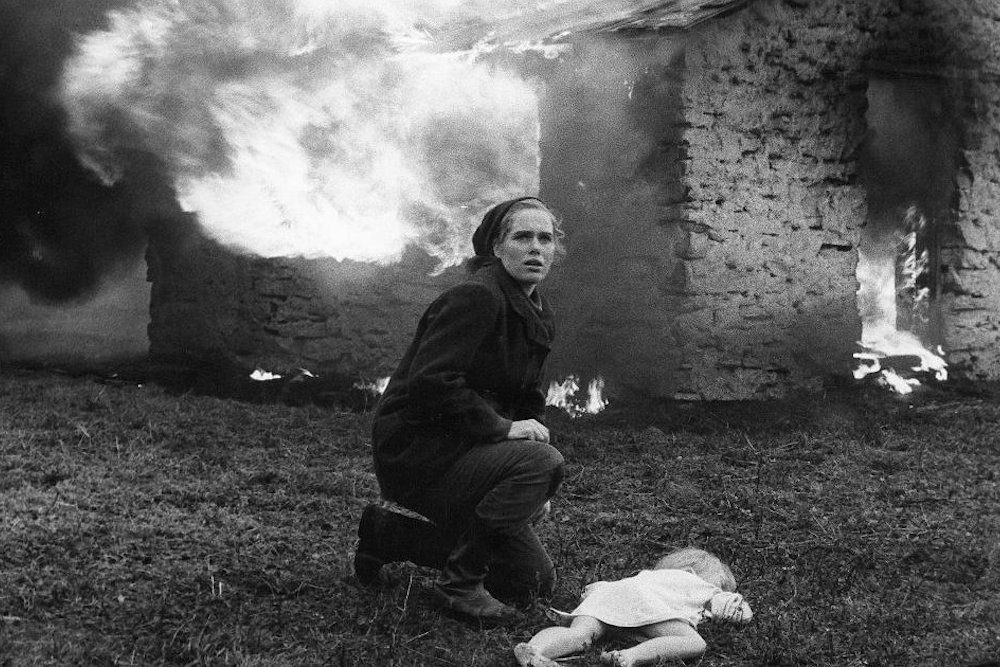 1. Shame. Unknown setting. In my survey of “best war films” lists online, I have found none which includes Shame, which is beyond shame. Released in 1968, it remains the definitive war film, in my opinion, and is unsparing in its examination of the soul. Ingmar Bergman shot it off the small island of Farö, but it’s not clear that the setting is intended as Swedish. Whatever this nation is, it’s either at war with an invading country or engaged in a civil war — left deliberately hazy to suggest a war that symbolizes all war without any political axe to grind. Its focus is on a simple married couple who are uprooted from home, falsely accused of bad allegiances, then freed on the condition that Eva performs sexual favors for a government official. Things escalate to the point of such humiliation that Jan, a pacifist by nature, snaps and becomes a moral monster. We share Eva and Jan’s intimacies and hopelessness on a level not matched in any other war film. Shame speaks deeply about the human psyche and the will to survive. The final scene of the exodus into a sea of corpses still haunts me. 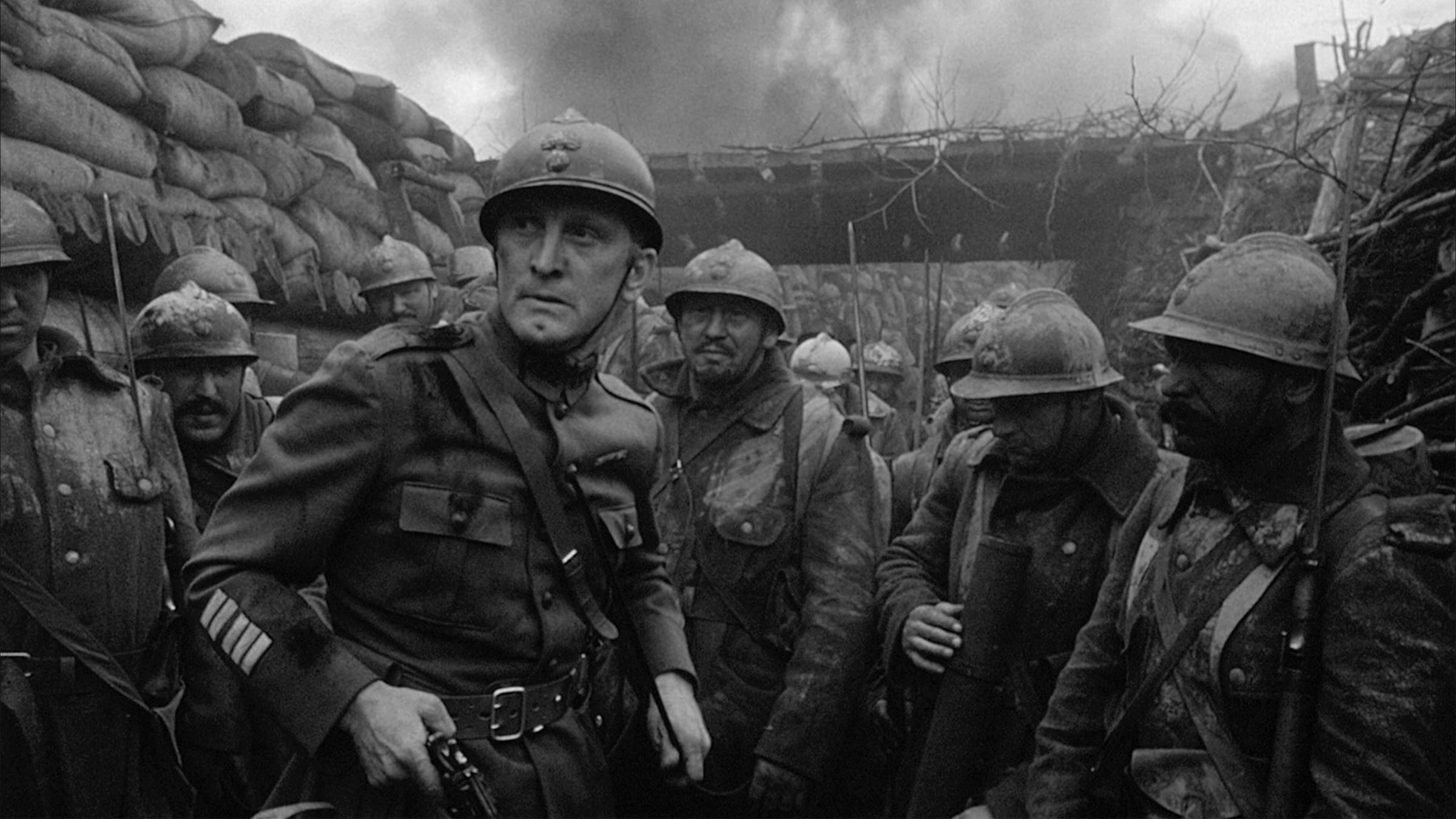 2. Paths of Glory. France, 1915-16; World War I. Stanley Kubrick’s anti-war film is presented with an uncompromising polemic but no sanctimony, and remains a lesson Oliver Stone could have learned. Paths of Glory is about the suicidal attack on an impregnable fortress captured by the Germans, inspired by the six-month bloodbath during the Battle of Verdun for Fort Douamont. It holds up well after so many decades (much as Spielberg tried, he didn’t surpass this brutal intensity in the opening sequence of Saving Private Ryan, a film I dislike), and the court marshal of the second part remains a convincing piece of courtroom drama. And then there’s the final scene: the poor ridiculed stage-singer who manages to shatter everyone’s soul, a moment’s epiphany in a cruel uncaring world. Against the terrible backdrop of the first world war, soldier grunts emerge as worthless pawns, to be thrown away for the sake of their superiors’ aggrandizement, and military tribunals stand as parodies of justice. 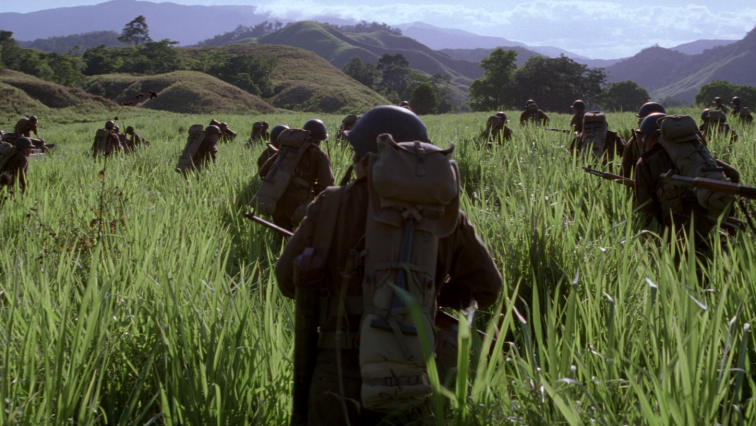 3. The Thin Red Line. Solomon Islands, 1942-43; World War II. This masterpiece was overshadowed by Saving Private Ryan (also released in 1998), when it should have been the other way around. Terrence Malick is a genius in all the ways Stephen Spielberg is Mr. Cheese. The Thin Red Line laments warfare through naturalist philosophy, and it’s both horrific and uplifting in a completely organic way. I believe that anti-war films have strong difficulty doing right by the viewer. They must get their message across loud and clear, but without resorting to college-campus screed, political innuendo, or hollow contrivances. What Bergman did at the level of personal intimacy (Shame) and Kubrick along the ladder of military hierarchy (Paths of Glory), Malick expands to the broadest level possible, examining life and death in cosmic terms. He finds beauty in each, yet an undeniable rage at the way the latter is reached. It’s a brilliant film, and the exotic setting of Melanesia somehow aligns perfectly with the tone of what Malick aims for.

4. The Painted Bird. Eastern Europe, 1944; World War II. If there was ever a film that depicted hell on earth through the eyes of a single person, it’s surely The Painted Bird. Set during the Holocaust in an unspecified Eastern European country (the language spoken by the characters is Interslavic), it shows the odyssey of a Jewish boy, as he wanders from village to village and is subjected to every kind of depravity. He’s beaten; he’s terrorized; he’s buried up to his neck. Eventually he is seized and given to the Nazis, and while he escapes execution, he winds up in the hands of a pedophile. Then it’s out of that frying pan into the fire of a female pedophile, who molests him around acts of bestiality; at one point she has intercourse with a goat. And so forth and so on. There are moments of fleeting compassion in this godawful road journey, and you will certainly need them. The Painted Bird shames the human species as it examines the worst of our impulses in the darkest scenarios, and yet strangely it offers the most authentic rays of hope in its rare moments of grace.

5. Lone Survivor. Afghanistan, 2005; Afghanistan War. If you want a true-story set in the Middle-East, this is the one to see. (What’s fact and fiction is explained here.) It tells of four navy seals on a covert operation in the Hindu Kush mountain range, spying on a Taliban hideout. When they’re spotted by a random group of goat herders, the seals make the kind (but very stupid) decision to let them go instead of killing them on the spot. From that point they fend off an unrelenting assault, as Taliban soldiers chase them through the mountains, surround them, appear suddenly from behind trees, entirely at ease in native territory. This is probably the most emotionally draining military sequence I’ve seen, and shows how much damage the human body can absorb before giving up the ghost. Lone Survivor honors the seals who died in this operation, but also the Afghan villagers who sheltered the lone survivor of the four, when it was basically suicide for them to oppose the Taliban in this way. The film is also acclaimed by military personnel as being one of the most realistic war films ever made, despite some of the dramatic license in the plot.

6. Full Metal Jacket. Vietnam, late 1960s; Vietnam War. There are zillions of films about the Vietnam War, many of them by Oliver Stone, most of them not very good. Even Kubrick’s has its problems, but I’ve seen the boot-camp part so many times it’s ridiculous. Gunnery Sergeant Hartman is one of the most entertaining film characters of all time, and he completely owns Full Metal Jacket. As a nineteen-year old, I remember thinking he went over-the-top for sake of theater, but quickly learned that actor R. Lee Ermey had been a real-life drill instructor, and that Kubrick allowed him to edit his own dialogue and improvise as he saw fit. I also remember my father saying he experienced some of these degradations heaped on the privates (and he was only in the Air Force, not the Marines). The film’s middle part is its weakest (where it feels like Europe more than Vietnam), but the sniper sequence at the end pulls it back on its feet. The first part alone earns it the sixth slot on this list.

7. 1917. France, 1917; World War I. The story begins on the fateful day Woodrow Wilson brought America into World War I (April 6, 1917), though there are no Americans portrayed in the film. It’s about two British soldiers ordered to deliver a message to a colonel who is sending his battalion into a nasty trap. The battalion is chasing after the Germans who only appear to be fleeing but are really about to unload an ass-pounding on the unsuspecting Brits. One of the two soldiers has a lot at stake in delivering the message since his brother is part of the battalion. What distinguishes 1917 is the immersive experience it offers through its entire “single shot” in which the camera never cuts. You feel like you’re there, in the rat-infested trenches, the underground bunker that collapses on the two guys (they barely escape), the desolate fields and ravaged towns. Unlike the incredibly overrated Dunkirk, this film lives up to the hype.

8. Fury. Germany, 1945; World War II. Few war films capture soldier camaraderie with Fury’s plain authenticity that makes you alternate between hating and loving these guys by the minute. The story is set in the final days of WWII; an American tank crew of five plow across Germany, and while they know American victory is guaranteed by this point, they sure don’t feel it; the Nazis dig in to the end. The tank battles are nightmares; the Germans resist every step of the way. The best scene comes at the film’s midpoint, right after the tankers conquer a German town. Two of the tank crew barge into an apartment where two women are hiding; sex results, but it’s not rape, and the unexpected tenderness on display is entirely real. Then the other three members barge in drunk, and a thoroughly unpleasant (and surreal) dinner ensues. The tank battles are spectacular and thoroughly realistic. Fury is defined by them. 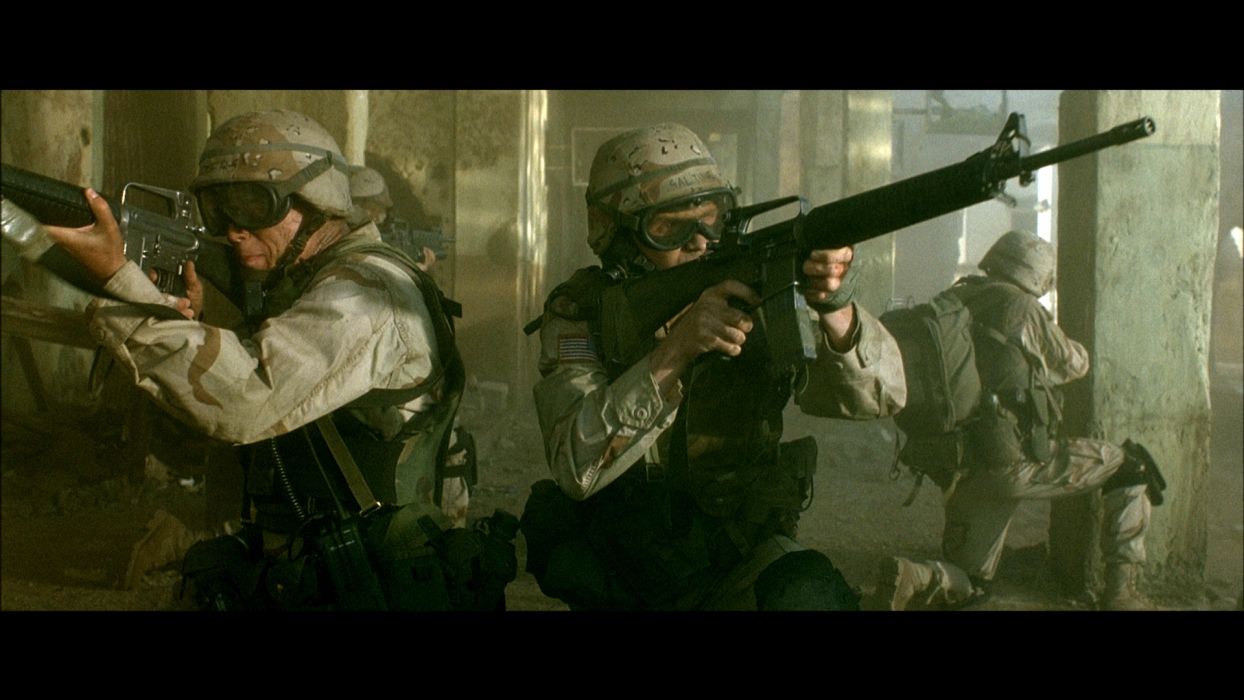 9. Black Hawk Down. Mogadishu, 1993; Somalian Intervention. Never has the chaos of battle been depicted so effectively as in Black Hawk Down. What should have been a simple seizing of Somalian lieutenants turned into a nightmare of 18 soldier deaths across an overnight standoff, with another soldier being captured as well. All things considered, it’s amazing the rangers and special forces were able to fight off an entire city as they did. I was actually in Africa the year of this event, and remember hearing of warlord Aidid. His weapon was hunger: capturing all the food coming into Mogadishu. The American intervention was long delayed and frustrating, and when finally put into effect was blown to smithereens by unforeseen blunders. Small mistakes and cruel acts of fate — these more than anything else are what left the soldiers stranded in the city teeming with Aidid’s thugs around every corner, well into the next day.

10. The Hurt Locker. Baghdad, 2004; Iraq War. Neither anti- nor pro-military, it’s a respectful sobering lesson in what bomb deactivation squads go through. This is basically the film American Sniper tried lamely to repeat: special-skilled soldiers, battle addiction, and the toll taken on wives back home. The title refers to shell shock, or the physical trauma of being continually close to the blast of an explosion: the horrible noise and prelude of compressed silence encasing you in a locker of pain. Kathryn Bigelow deserved to take best picture for this. The Hurt Locker is an adrenaline rush, but also a professional depiction of the Iraq War that refuses to plant a flag on either side of the conflict. It’s a thoughtful film about what it means to have skills that set a soldier above his peers, without glamorizing the role.