Vote in Brandon Wason’s Synoptic Problem Poll and catch the discussions in comments. For a long time I was an advocate of the two-source hypothesis until finally converting to Farrer. But as the poll results show, the former won’t easily go away.

What Kind of Atheist Am I?

Agnostic. Agnostics consider the possibility that they may be wrong about God’s existence, no matter which side of the fence they stand on. Always willing to objectively evaluate the most ridiculous proof, nevertheless, these guys are skeptics of the Nth degree.

I haven’t read Nicholas Perrin’s Thomas, The Other Gospel, but I’ve certainly read (and reviewed) April DeConick’s Recovering the Original Gospel of Thomas which he criticizes. Judging from April’s recent blog-citations (I, II, III, IV, V), it’s evident that Perrin distorts her position at times. Have a look-see: it’s pretty embarassing.

Though I disagree with April’s theory about the way Thomas evolved, I really like her book. (I can’t recall the last time reading something I so much wanted to be right but ultimately couldn’t go along with.) But whether in agreement or disagreement, we need to be sure we’re representing our dialogue partners accurately.

UPDATE: Mark Goodacre has a helpful review of Perrin’s book.

Other bloggers have called attention to Angela Erisman’s list of reading material which can help improve your writing. I’d recommend Constance Hale’s Sin and Syntax in particular, for any writing professional who has trouble knowing when to break the rules and when not to.

At one point Hale warns against seven deadly sins in writing (pp 18-29). Let’s look at them:

1. Sloth. “Grabbing the closest shopworn words without so much as a glimmer of guilt, or hastily creating inelegant nouns out of other nouns, or even verbs.” (p 18) And even worse — as I complained about in The Dumbing Down of English Nouns — creating verbs out of nouns. Then there are cliches, which should always be avoided (I would say “avoided like the plague”, but that’s a cliche, right?). I agree with Hale that sloth is the most common and insidious sin among writers.

2. Gluttony. “The gourmandish urge to use five words where one would do.” (p 20) This often leads to the use of roundabout and redundant prepositional phrases instead of straight nouns and verbs. I had a problem with this in college, and learned slowly and painfully that less is more, more often than not. A good mantra to recite when sitting at the keyboard.

3. Fog. “Using vague and woolly words rather than concrete ones. A writer who hasn’t stopped to think about what he or she is trying to say piles up abstract nouns like phenomenon, element, individual, objective.” (pp 20-21) It’s easy to fall into this trap when having a brain cramp, but the remedy is simple: go back, revise, and defog your writing.

4. Pretense. “Resorting to pompous, ponderous, or just imponderable nouns.” (p 22) The worst sinners are academics so preoccupied with their diction that they lose sight of their goal: communicating with an audience (p 23). Insecurity and arrogance lie behind pretentious words like utilize, praxis, pericope, normalcy and colloquy. Drop them in favor of use, practice, passage, normality and conversation — except in the very rare contexts warranting the others.

5. Gobbledygook. An inability to keep things simple. Examples: capitalized cost reductions instead of down payments; a specialist in arms control and security issues instead of a weapons wonk. As with sin #2 (gluttony), less is more.

7. Euphemism. Describing offensive behavior with inoffensive terms, or sensitive issues with politically-correct language. So in place of firing managers use downsizing, rightsizing, or reshaping. When referring to the bombardment of defenseless villages, the government speaks of pacification. Black people are Afro-Americans; retarded people are mentally challenged. “Euphemisms are for wimps, invented in an attempt to avoid offending others or to pussyfoot around socially prickly subjects. They conceal reality rather than reveal it — which is, after all, what a writer should be doing.” (pp 26-28)

Many would object to these complaints (especially #’s 1, 4, 6, and 7) with the retort that language evolves, and we shouldn’t be linguistic fundamentalists. “To dialogue” may be a slothful way of creating a new word, but for better or worse, the dumbing down of our English nouns has become more acceptable. Academics may sound pretentious, but their vocabulary evolves according to the canons of their professions. But the counter-retort, Hale’s point, is that language doesn’t always evolve for the better. Following conventions and trends doesn’t put you on the road to strong and aesthetic prose anymore than slavishly following the rules does. The trick is knowing when to follow the crowd and not to. For myself, I’ll never warm to “dialogue” as a verb, no matter how many dictionaries acknowledge it.

Who are the good writers of biblical scholarship? There are many, but the following come straight to mind: Donald Akenson, John Meier, Mark Goodacre, and Philip Esler. All have robust and engaging prose, and steer clear of the seven deadly sins. John Dominic Crossan is another story. Some view him as a gifted writer, but he’s one of the most pretentious (sin #4) I’ve ever read. He revels in words like “normalcy”, and loves pompous aphorisms, trying to achieve Schweitzerian heights but failing miserably. (Only a true genius like Schweitzer can write like Schweitzer.) Then there is Ed Sanders, whose landmark ideas have been marred by italic overkill and minor gluttony (sin #2). Mark Nanos has wonderful and important ideas, but he’s where I was in my undergrad years (heavy gluttony, sin #2). I think gluttony results from a subconscious fear that readers will lose your point unless you spell things out every step of the way, in every sentence, with hyper-qualifying phrases and clauses.

More on Hale’s Sin and Syntax later. This blog has been stalling lately (for various reasons), but I hope to get back on track soon.

8. Polemic. The use of unnecessarily hostile language including overstatement, ridicule, insult and hyperbole. As a general rule, if you are writing in harsh criticism of another scholar, imagine yourself saying it out loud at a conference with the person present in the room, and ask yourself if you are comfortable with your tone.

I should note that this complements sin #7 rather than opposes it. Hale concedes that civility and tact are important and should be cultivated — just not with euphemisms (p 26).

Here’s my long overdue list of the best films of 2006. This was a strong year. The top three are masterpieces and would be included in a longer list of my favorite films of all time.

1. Hard Candy. 5 stars. This film is so many things: a dialogue drama, revenge thriller, enacted domination fantasy, and morality puzzle. I see a different film every time I watch it, and in the sum of those viewing experiences faults become strengths. The first time it was a Lolita set-up which turned into castration revenge. On second viewing I knew what was coming, and since Hayley was faking the castration her torture seemed a cop-out, and Jeff’s suicide silly and unbelievable. But on third and later viewings I saw an enacted domination fantasy: a man’s guilt-ridden wet-dream of being tormented by a 14-year old fantasy figure, and ending in his “noble” agreement to kill himself. Hard Candy works brilliantly on these meshed levels of reality and fantasy.

2. United 93. 5 stars. You feel helpless watching it, but it makes you think about 9/11 for the right reasons. There are no hindsight politics in play. It’s skillfully directed without a single exploitive frame. Ben Sliney plays himself, and to this day I can’t fathom how he got slammed with 9/11 his first day on the job as the FAA’s National Operation Manager. In the end, everyone on Flight 93, terrorists and passengers alike, were working toward the same goal—dying honorably. I would have easily pronounced this the film of the year if not for Hard Candy, and guess what? The next one is also a close rival.

3. Pan’s Labyrinth. 5 stars. An 11-year old girl retreats into her imagination to escape the horrors and brutality of fascist Spain. (But is it really all in her imagination?) This is a masterpiece on par with Lord of the Rings, and perhaps it’s no surprise that Del Toro, like Peter Jackson, began his career in the horror genre. Fairy tales are supposed to be horrific (as they were before Disney polluted them), and this film puts us in touch with the spirit of Grimm more than today’s children’s books.

4. Deja Vu. 5 stars. That Tony Scott can pull off time travel so well is further testimony to his underrated talents. He has become, by far, my favorite popcorn film director, and he uses Denzel Washington like Scorsese used DeNiro or Tarantino still uses Samuel Jackson. The action holds you in a vise, the time paradoxes are brilliantly handled; this is the rare transcendent action thriller that’s very hard to pull off.

5. The Departed. 4 ½ stars. Scorsese finally scores at the academy. A gangster film about two moles, one working for a crime boss as a state trooper, one working for the police to get as close as possible to the crime boss. Not every actor needed to put on a Boston accent, and the coincidence of the psychotherapist having an affair with both moles was weak, but it’s an otherwise great film, with an apocalyptic ending that calls to mind classics like The Godfather and Taxi Driver.

6. Little Children. 4 ½ stars. Shows adults of upper-middle class suburbia as they are: overprivileged, unappreciative, and pathetic (like little children). A film you can watch many times, speaking profoundly to the human condition. Sarah’s reinterpretation of Madame Bovary as a feminist “hungering for an alternative”, delivered to a living room of stunned women, is priceless. 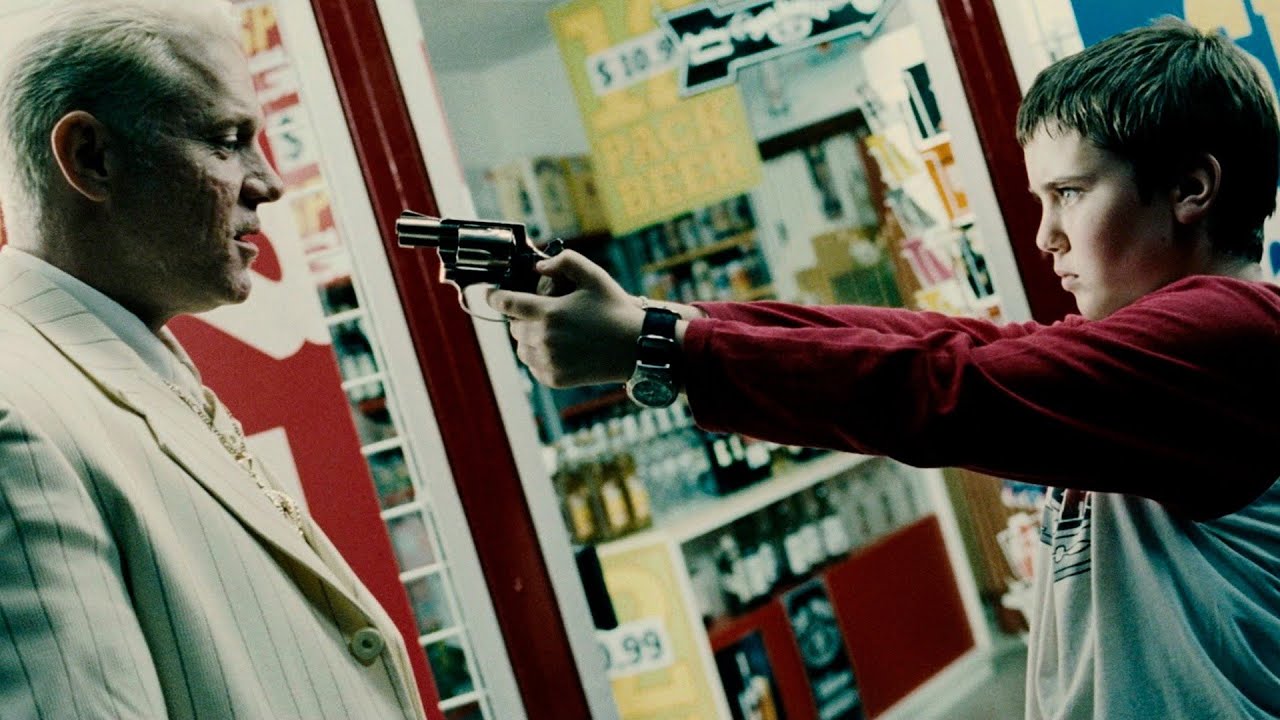 7. Running Scared. 4 ½ stars. This one does not let you come up for air, starting with a drug deal gone bad, and then going into the wildly seedy territory of pimps, whores, child molesters, and dirty cops who like to ruin faces with hockey pucks. Exhilarating and over the top, it feels like Quentin Tarantino meets Martin Scorsese. I didn’t want it to end.

8. The Descent. 4 ½ stars. Six women go spelunking in an unchartered cave, get avalanched inside, and then assaulted by strange nocturnal humanoids. The U.S. theatrical version butchered the ending (by allowing one of the women to make it out alive), but the DVD thankfully has the original U.K. version (the last woman only dreams of getting out, but remains trapped with no hope of finding an exit). Harks back to the raw brutality of ’70s horror films.

9. Babel. 4 stars. Uses the Tower of Babel story as an allegory of failed communication. In three stories (which are obliquely interconnected), people become isolated on account of misunderstandings and prejudice. The plots become a bit contrived to make the big picture work, but it’s inevitable in a film like this. It doesn’t feel manipulative here. 10. Children of Men. 4 stars. A bit overrated, but there’s no denying its vision. Portrays a bleak future in which humanity has lost the ability to reproduce, immigration is criminal, terrorism runs rampant, and law officials treat people like beasts. A pregnant woman suddenly offers hope for humanity, but it’s never entirely clear why.

The seventeenth Biblical Studies Carnival is up on Chris Heard’s Higgaion.