If Tomb of Horrors is the most punishing D&D module, and The Lost City the most inspired, and Castle Amber the most rewarding, what is Vault of the Drow? Without doubt, it’s the most brilliantly conceived. Many grognards call it the best thing Gary Gygax ever designed, and in hindsight it’s obvious why. But back in the day it wasn’t esteemed so highly. Certainly gamers I knew didn’t think much of it; it was almost a non-event.

I think there are two reasons for this, the first being Vault of the Drow‘s problematic relationship to the modules which surround it in a series. D3 falls in the worst possible place, penultimately trailing five dungeon crawls: the giants of G1-G3, the caverns of D1, and the kuo-toan shrine of D2. By the time players hit D3 they’re itching to get to the final module set on the Abyss (Q1), to which the Vault effectively serves as a mere doorstop. The second reason feeds into the first. The Vault is an underground realm, not a dungeon crawl, and with enough care can be mostly sidestepped by PCs not interested in lingering. Which is a shame, because the city of Erelhei-Cinlu resounds with opportunity.

The problem is that I was blind to this, not only because I couldn’t read a map properly, but because I and my players couldn’t wait to get to the Abyss for the showdown with Lolth. Which is, of course, its own problem. 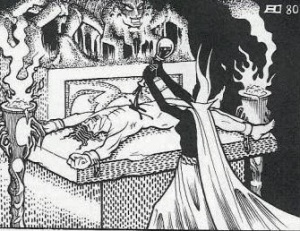 As widely acknowledged today (with some embarrassment), Queen of the Demonweb Pits is an abominable module. Not only is the design a joke (resembling nothing horrifying like you’d imagine the Abyss to be — even involving, yes, a goddamn spaceship as the spider-queen’s lair), but there is simply no reason, per the plot design of G1-D3, for players to take the suicidal step of confronting Lolth on the Abyss. Lolth and her priesthood have been all along opposing the renegade drow attempt to invade the surface world. The goddess isn’t the problem; her wayward servant in the Vault is. Q1 is a complete non-sequitur, and only makes sense if the PCs are overambitious hotheads or fools, or if they just want the orgasmic thrill of trying to kill a deity on her home plane. (Which of course is what we all wanted.) It’s unclear what kind of module Q1 would have been had Gary Gygax not bailed on the project and left it in the hands of David Sutherland, but it’s one of the greatest old-school ironies that a masterpiece like Vault of the Drow was overshadowed by a poorly designed follow-up that made absolutely no sense.

The Vault is best used as either the final module in Gygax’s G1-D3 series, or (as I prefer) a complete stand-alone. If I had respected the thing and gotten proper play out of it, I have no doubts it would be my favorite sandbox, eclipsing even The Lost City. The descriptive writing of the underworld is mind-blowing. Here’s what greets the PCs upon entrance:

“The Vault is a strange anomaly, a hemispherical cyst in the crust of the earth, a huge domed fault over 6 miles long and nearly as broad. The dome overhead is a hundred feet high at the walls, arching to several thousand feet height in the center. The radiation from certain unique minerals gives the visual effect of a starry heaven… These ‘star’ nodes glow in radiant hues of mauve, lake, violet, puce, lilac, and deep blue. The large ‘moon’ of tumkeoite casts beams of shimmering amethyst which touch the crystalline formations with colors unknown to any other visual experience. The lichens seem to glow in rose madder and pale damson, the fungi growths in golden and red ochres. The rock walls of the Vault appear hazy and insubstantial in the wine-colored light, more like mist than solid walls. The place is indeed a dark fairyland.” 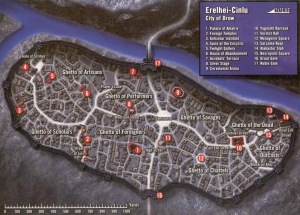 DMs who know what they’re doing (as I clearly didn’t back in the day) can serve up a nightmare world where factions of dark elves plot against each other, demons and undead walk the streets, and obscene sacrifices are offered to Lolth, all under that purple glow of phosphorescent fungi and bizarre “moon”. There are torture parlors, bordellos, drug saloons, and avenues where the undead feast openly, but here’s the thing: everything is disturbingly civilized. And gorgeous.

It’s worth noting that Dragon Magazine #298 fleshed out the Vault, especially the city of Erelhei-Cinlu (see right), as well as the sadistic culture of the drow. Their bloodsports entertainment is downright obscene, involving bound captives held beneath magic acid that drips onto the forehead, opening up a hole in the victim’s skull and melting the brain: “During this time, orbs of telepathic power communicate the dying victim’s memories to the salivating crowd. Attendees vicariously savor the captive’s most traumatic and painful experiences as he slowly succumbs.” There is also the matriarchal sexism, which allows females to fuck whomever they please, while husbands must remain faithful and are usually sacrificed if caught cheating.

On the other hand, if a powerful priestess makes advances on another woman’s husband, she can have him sacrificed for daring to spurn her advances. Attractive males often face these no-win situations and disfigure themselves to stay alive. As for whore houses, there are many, but the Alabaster Slab is the most degenerate, and one I’d be sure to patronize if I had a PC with nihilistic inclinations: a brothel of the dead, run by a demonic madame who provides the “darkest sort of oblivion” to clients.

The drow are D&D’s most iconic race, and it’s an outrage that they were later bastardized. Gone (by the mid-’80s) were the depraved sadists, and in their place a Disneyfied race of dark elves — those poor misunderstood anti-heroes of a dawning political correctness. Gary Gygax had created a genetically evil race without apology, and his are the only drow I acknowledge. I was glad to see Dragon #298 do likewise, and honor the Vault with new surprises. In my teen years I grasped none of the Vault’s potential, but in fact it has more potential than any other module. That’s why it’s my favorite.