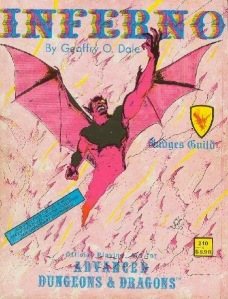 Inferno is my ultimate gaming fantasy come true. But it’s an anomaly in this six-part series, because it’s a half module that was never finished — until this very year. The first four circles comprised the classic module (1980), and as of September 2014, all nine circles are available in a revised and expanded package. For sake of simplicity, I will refer to this vast body of work as the Inferno Project. Though the recent publications aren’t written for 1st edition D&D (for copyright reasons), they are entirely in the old-school vein and designed by the same genius, Geoff Dale.

As I said, the Inferno Project is my dream come true, and it’s a dream that began with Ed Greenwood’s famous Dragon articles in 1983. I always loved The Divine Comedy, and Greenwood’s Nine Hells took at least some inspiration from that epic. He gave us the wastelands of Avernus with atmospheric fireballs; the emerald clouds and stagnant rivers of Dis; the foul marshes of Minauros, plastered with rotting carrion, pelted by rain and hail; the volcanoes and lava rivers of Phlegethos; the swamp of Stygia, with surrounding mountains flashing their white “cold fires”; the black, smoke-filled layers of Malbolge and Maladomini; the glaciers and outer-space cold of Caina; and the misty realm of Nessus, where the ground scorches those of non lawful-evil alignment. I wanted a module for all of this — for the most epic outer-plane adventure imaginable. Little did I know that such already existed. Inferno had been published three years before, and even more incredibly was based exactly on Dante. But it was one of those obscure Judges Guild modules, not TSR, which my local stores didn’t carry. It would be years before I became aware of Dale’s version of Hell.

I should stress that I still admire Greenwood’s version. But Dale’s is superior — more imposing, and far more weird. In depicting the torture of souls, he produced a medieval canvass completely aligned with a literary classic. Some object to the Christian baggage, but that really isn’t an obstacle; those elements have been tweaked for D&D’s pagan context.

In fact, the Christian layovers are some of Inferno‘s best parts. My favorite encounter area in the history of D&D moduledom is the Noble Castle on the First Circle. It isn’t a place of torment, rather a state of shadowy bliss for “virtuous atheists” who had the simple misfortune of existing in a time long past: “They are the just and good peoples from the Days Before the Gods and live in relative bliss and comfort.” That’s a brilliant translation of Dante’s Limbo, which is the resting place for the virtuous unbaptized; i.e. those whose only sin was not knowing Christ, such as righteous Old Testament figures who predated Christ, and noble pagans from any time. There’s something very distressing about this pocket paradise stranded in an ashen wasteland, with its gardens, trees, clean water, benign wildlife, even music, and the benign hospitable souls (including paladins) forced to dwell here for eternity. They’re content for the most part, yet aware their fate is somehow blighted. Above all, the Noble Castle underscores how weird the Inferno is, unpredictable and unfair. In the official rules, good souls could count on eternal rest in an upper plane befitting their alignment (the Seven Heavens, Twin Paradises, Elysium, etc). Dale’s template of the afterlife is much less secure, and seems premised on the idea that souls can be kidnapped and confined where they don’t really belong. 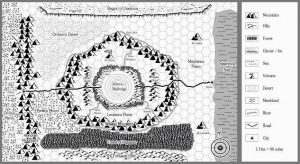 On the circles below the first, souls are tortured for whatever deadly sin they committed in life. One of the juiciest punishments is the second bolgia of the Eighth Circle. As in Dante’s poem, these are the flatterers, who live in a pit of shit since that’s all they spoke in mortal life:

The Inferno Project owes to Dante also in terms of the tour-guide approach. Devil rulers can be receptive enough to show PCs around torture pits where souls labor in degrading tasks, and answer questions provided they have the proper passes and behave themselves. These civilized devils are also leering sorts who will as likely attempt to rape female PCs before murdering them — a typical reminder of how faithful modules were to gritty pulp fantasy before D&D became so sissified. Some of the most vile and deadly magic items (often cursed) can be found throughout the Inferno, as well as hidden talismans that can be used against the devils.

But it’s the Dantean landscapes that mesmerize: the River Archeron, the Styx River, the City of the Heretics, the River of Boiling Blood, the Wood of the Suicides, the Desert of Fire (a smoldering 125 degrees), and, especially at bottom, the Frozen Swamp of Cocytus. The Ninth Circle is a prison for traitors and backbiters, a constant 15 degrees, has winds blowing up to 80 miles/hr, blinding fog and roiling thunder that makes normal speech impossible. Lucifer is confined at the pit’s center, and he’s a piece of work at 750 feet tall — and unfortunately the only ticket out of Hell.

On the one hand, I think it’s unfortunate that Dale’s vision of Hell didn’t become official. It became an obscurity I wouldn’t even learn about until the days of internet. But then it’s probably just as well. Not only did Inferno remain a half-finished product, it was too offbeat and worrying for many gamers. I consider it a superior alternative to the Greenwood template and am glad for the project’s completion at long last. It’s my wet dream of Dante’s hell-hole made real. If I could run only one more campaign in my entire life, it would involve every damned circle of the Inferno.

Next and final: Dark Tower.