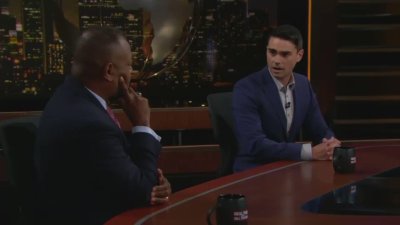 On Real Time last weekend, Bill Maher invited Ben Shapiro and Malcolm Nance to debate Critical Race Theory. Frankly I think Nance made an ass of himself. Shapiro was engaging the issue, and Nance did little more than evade the points being raised and insult Shapiro.

The discussion began with Maher asking each of the two guests to define Critical Race Theory. This is how Shapiro defined it:

“Critical Race Theory essentially argues that racism is baked into all the systems in American society, and that any sort of neutral system is in fact a guise for racial power. And so the argument is made by Derrick Bell, for example, that Brown v. Board of Education was actually a way for the white community to leverage its own power; it wasn’t an attempt to end segregation in public schools. Even things that are purportedly good in terms of race, so long as they uphold these broader systems — like capitalism, or the meritocracy — these good things are actually just guises for power. What that boils down to in practical terms is that all disparity equals discrimination. If you can see any stat where black people are under-performing white people, that means the system is set up for the benefit of white people, and that white people have a duty to tear down these systems in order to alleviate the racism that’s implicit in those systems. When it comes to schools, what this tends to come down to is that kids who are white experience privilege because the system was built for white people, and we have to change the standards.”

It’s a good summary, and even Nance (who obviously doesn’t like Shapiro) agreed. When asked by Maher to give his own definition of CRT, Nance said: “Oh, I agree with everything that he [Shapiro] just said.” Having then agreed on a definition, Nance endorses Critical Race Theory where Shapiro rejects it. I’m not a fan of Ben Shapiro, but I mostly agree with that he says here.

Basically, according to Critical Race Theory, racism is defined as “prejudice + power”. Prejudice alone isn’t racism; only people in power are racist. So when you watch the All in the Family classics, for example, and see Archie Bunker and George Jefferson being equally nasty and bigoted to each other, only Archie is the actual racist, according to CRT theorists (Bell, Crenshaw, Delgado, etc.). George doesn’t qualify as a racist — his sneers about “honkey houses” and such not withstanding — because he’s a black minority. It all boils down to power and power structures and power discourses, even when you can’t pinpoint who in particular is wielding all of this pernicious power.

Some critics have claimed that postmodern theories like CRT amount to a grand social conspiracy, or, as Helen Pluckrose and James Lindsay have put it, a “conspiracy theory without conspirators”. A theory, that is, in which power is not exercised straightforwardly and visibly from above, but permeates all levels of society and is enforced by everyone, through routine interactions, expectations, social conditioning, and culturally constructed discourses that express a particular (power-based) understanding of the world. Communicating with people who espouse Critical Race Theory can thus be extremely difficult, because they’re so obsessed with knowledge, power, language, and cultural relativism, that they see these dynamics at work (quite literally) everywhere – power displays in every interaction, offense in practically every other sentence, even when these aren’t obvious or even real.

The conspirators are ultimately white people in general, whether they are either inherently racist, de facto racist, or unwittingly racist (even when having good intentions), because they are part of an all-pervasive racist machine that’s simply inescapable until the system is demolished. “One could easily be forgiven – if critical race theory didn’t consider it racist to forgive this – for thinking that Critical Race Theory sounds rather racist itself, in ascribing profound failures of morals and character to white people.” (Pluckrose/Lindsay, p 121)

And unlike traditional civil rights discourse, which stresses incrementalism and step-by-step progress, CRT opposes the liberal order. Meaning, it opposes (yes) equality theory, legal reasoning, Enlightenment rationalism, and the neutral principles of constitutional law. All of this is deemed an unacceptable framework for addressing America’s racial problems, since all the elements of this framework were constructed by whites with agendas of power. Science itself is opposed insofar as it serves the interests of the powerful people who established that science (white western men) while setting up barriers against the participation of others.

To be Colorblind or not

Then there’s this. According to Critical Race Theory, to be colorblind is in fact to be racist, because it amounts to an attempt to ignore the all-pervasive racism that fuels white privilege. But that’s nonsense. To be colorblind is to treat everyone with equivalent human dignity regardless of their ethnicity or skin color — to be effectively “blind” to ethnicity and skin color in that sense. It does not mean to be blind to the problems minorities have faced, and continue to face.

Not only are the Critical Race Theorists wrong in claiming that colorblindness is racist, they are endorsing, from a practical point of view, atrocious psychology. Telling people who aren’t racist that they are, or implying that they are — and that even their good intentions are proof of latent racism — is a sure way to alienate everyone and not be taken seriously. As Pluckrose and Lindsay put it:

“Worst of all is to set up double-blinds, by telling people that if they notice race it is because they are racist, but if they don’t notice race it is because their privilege affords them the luxury of not noticing race. By focusing so intently on race and objecting to color-blindness – the refusal to attach social significance to race – critical race theory threatens to undo the social taboo against evaluating people by their race.” (Cynical Theories, p 134)

Yet another reason why CRT theorists are frustrating to communicate with. Heads they win, tails you lose.

Most ironic is that race is far more of a social construct than sex and gender, and yet the CRT-minded wokes will blast a white guy who identifies as black, while celebrating him if he identifies as a woman. Biological sex has real, obvious, physical consequences – menstruation, pregnancy, birth, genitals, muscle mass, hormonal levels, etc. A man will never get pregnant no matter how strongly he identifies as a woman. A lesbian or gay couple will never have biological children who share both their genes (though it’s possible for one or the other of the pair to produce a biological child thanks to sperm/egg donors and invitro fertilization).

Race, on the other hand, is far less easily delineated. Most biologists these days don’t even talk of races, but rather of populations, which can be identified through genetic markers as having had slightly different evolutionary heritage. The concept of race – from a biological point of view – is almost useless in practice. It also appears to be a relatively recent obsession. In the Bible, the Mediterranean region had whites, blacks, and browns, and yet skin color is almost never mentioned in it; it just doesn’t seem to have been significant. Racism, as we understand the term, seems to have emerged during the 16th century, during which time prejudice on grounds of religious difference gave way to beliefs about the superiority of some races over others.

The fact is that no matter what our “race”, we can all seamlessly interbreed with each other, resulting in offspring who are not so clearly categorized into one particular race. You could very honestly say, in fact, that race is a spectrum (of various physical characteristics), unlike sex. But while the Critical Race Theorist agrees – or pays lip service to – the idea that race is a social construct, you’d best take care how you construct that for yourself, lest you fall under the woke ire.

To be clear, racism remains a serious problem in society and needs to be addressed. But Critical Race Theory doesn’t provide sound tools for addressing them, and critical race theorists shouldn’t be surprised when they are derided and caricatured by those on the populist right, or when they are not taken seriously by classical liberals, who are much better equipped for the task. The swiftest progress made against racism (and sexism for that matter) occurred in the 60s and 70s, before postmodernism became influential, and long before the emergence of the applied postmodernism of the wokes. Racism is best dealt with by being honest about race experiences, while still working towards a common vision: that the principle of not discriminating by race – whether one is a minority or in a position of power – should be universally upheld.

Affirm that racism remains a problem in society and needs to be addressed.

Deny that Critical Race Theory provides a useful tool to do so. Racial issues are best solved through the most rigorous analyses possible.

Contend that racism is best defined as prejudiced attitudes and discriminatory behavior against individuals or groups on the grounds of race and can be successfully addressed as such.

Deny that racism is hard-baked into society via discourses, that it is unavoidable and present in every interaction to be discovered, and that this is part of a ubiquitous systematic problem that is everywhere, always, and all-pervasive.

Contend that each individual can choose not to hold racist views and should be expected to do so, and acknowledge that racism is declining over time and becoming rarer [thanks mostly to liberal Enlightenment values that wokes and CRT theorists decry].

Kudos to Bill Maher for hosting the debate.