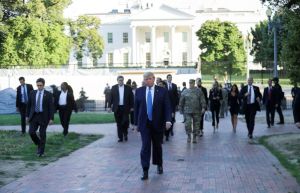 There’s been a lot of noise about Donald Trump’s supposed “Jericho Walk” a few days ago, when he visited St. John’s Church (the Church of the Presidents) across from the White House. The police used tear gas to drive away protesters, and church leaders denounced Trump for turning holy ground into a battleground. Trump devotees, on the other hand, praised him for his righteous “Jericho Walk”. But what does a Jericho Walk refer to?

A Jericho Walk is a ritualized march, enacted so that God will intercede, protect, or change something dramatically. It’s patterned on Joshua’s silent march around the city of Jericho for six days straight (Joshua 6) until the walls miraculously fell flat to the ground, allowing the Israelites entry into the city. A legendary account to be sure, but regardless of how historical it is, the Israelites and later Jews believed it was historical — as historical as Moses’ parting of the Red Sea.

It’s puzzling that anyone would call Trump’s visit to St. John’s a Jericho Walk. By the first century, it was Jewish underdogs who led such marches. They were prophets who ritually reenacted the various acts of exodus from slavery and arrival in the promised land. Every time these marches happened, the prophets and protesters were rounded up, and either slaughtered or imprisoned by the Romans.

For example, there is the case of Theudas (sometime between 44-46 AD) who fired up the masses to follow him to the Jordan River, which he promised to part, just as Moses had parted the Red Sea 1700 years before (Exodus 14-15), and as Joshua subsequently parted the Jordan upon beginning the conquest of Israel (Joshua 3).

Now it came to pass, while Fadus was procurator of Judea, that a certain magician, whose name was Theudas, persuaded the majority of the masses to take their possessions and follow him to the river Jordan; for he told them he was a prophet, and that he would, by his own command, divide the river, and afford them an easy passage over it; and many were deluded by his words. However, Fadus did not permit them to make any advantage of his wild attempt, but sent a troop of horsemen out against them; who, falling upon them unexpectedly, slew many of them, and took many of them alive. They also took Theudas alive, and cut off his head, and carried it to Jerusalem. This was what befell the Jews in the time of Cuspius Fadus’s government. (Antiquities 20:978-98)

Palestine under Roman rule was oppressive, and to many Jews their promised land had become a new Egypt. By promising to part the Jordan River, Theudas was copying Moses and Joshua: he would lead a new exodus out of Palestine, across the Jordan River, and into the desert, where God would perform some miraculous event to liberate the Jewish people from Roman rule. Theudas was no more a violent insurrectionist than Jesus of Nazareth; he doubtfully had plans to lead the masses back into Palestine for a violent “reconquest” of the promised land. Like most prophets he left violence and vengeance to God. But the Romans took no chances. Large-scale protests like this were politically loaded and catalyzed the more violent movements led by bandits and would-be messiahs. Sort of like the way today’s peaceful protesters of George Floyd’s death have triggered the more violent and reprehensible riots. Theudas got his head chopped off accordingly; today’s peaceful protesters are tear gassed, associated and conflated with rioters.

Another example is the unnamed Egyptian prophet (from the 50s AD) who gathered followers and preached that he would topple the walls of Jerusalem:

Moreover, there came to Jerusalem from Egypt a man who declared that he was a prophet, and advised the multitude of the common people to go along with him to the Mount of Olives, which lay over against the city. He said that at his command, the walls of Jerusalem would fall down, through which he promised to provide them an entry into the city. Now when Felix was informed of these things, he ordered his soldiers to take their weapons, and came against them with a great number of horsemen and footmen from Jerusalem, and attacked the Egyptian and the people that were with him. He also slew four hundred of them, and took two hundred alive. But the Egyptian himself escaped out of the fight; but did not appear any more. (Antiquities 20: 169-171)

The Egyptian prophet was reenacting Joshua’s “Jericho Walk”, by marching around the walls of Jerusalem, after which they were supposed to miraculously fall down. Another peaceful protest (leaving violence and vengeance to God), but the Romans didn’t care; they killed and captured hundreds of these Jericho Walkers, though the Egyptian himself managed to escape.

To call Donald Trump’s visit to St. John’s Church a Jericho Walk is backwards in the extreme. It is the peaceful protestors (though not the rioters) in the Black Lives Matter movement who have been engaging in what could legitimately be considered “Jericho Walks”. Trump is Caesar, and quite the opposite of a Jericho-Walker. Those protesting the death of George Floyd are crying out against systematic oppression — just as Theudas and the Egyptian had done by their ritualized imitations of Moses and Joshua.