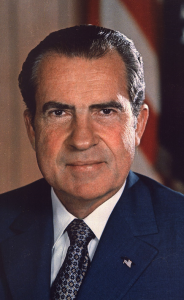 Most people think of Nixon as a conservative, but his policy record tells a different story. He was a strong activist for environmental protection. He ended the military draft, creating the voluntary army we have today. He ended public school segregation in the South. He was the best and most effective president for the Native American Indian cause. That’s the upside of his liberalism. The downside is that he was also a fiscal liberal — the last Keynesian president until George W. Bush and Barack Obama. He spent huge amounts on welfare (even more than Lyndon Johnson had for his “Great Society”) and alongside his loose money policies — and on top of all his predecessor’s sins — this ended up causing the great stagflation of the ’70s.

Everyone remembers Nixon for Vietnam and Watergate, which is understandable. I’m not here to argue that Nixon was a good president, but that he was complex, and did more good than most give him credit for. As he was being cursed on his way out of the White House, the Native Americans were singing his praises. His detractors had more to be thankful for than they realized.

I’ll examine the good and bad in the critical categories of peace, prosperity, and liberty.

The good: China and the Soviet Union

The stain of Vietnam causes people to forget that Nixon had a generally humble foreign policy. His famous visit to China resounds to his credit. By 1969 relations between the Soviet Union and China had become so badly strained that border wars broke out between them. China was the more radical of the two communist powers, but also the weaker of the two, and Nixon believed in supporting the weaker China against the Soviets. Nixon was quite clever in playing one Soviet power off the other, and the Soviets ended up signing arms control agreements with the U.S. that limited nuclear weapons and anti-ballistic missile systems. This was the first agreement of its kind between America and Russia, and saved both countries considerable money.

Nixon’s visit to China not only resulted in better relations with that country, but it made the Soviets want peaceful relations with America. It was no small feat for a president to improve relations with two countries who were supporting his own enemies in the Vietnam War. Nixon’s detente policy with the Soviets goes some way to off-setting his Vietnam sins, as does this next…

The good (2): The Middle-East — The Yom Kippur War

In 1973 the President of Egypt, Anwar Sadat attacked Israel, trying to take back some of the land lost during the Six-Day War of 1967. He was allied with Syria in this venture, and the Soviets sent weapons to support them. Israel took a massive pounding, and Nixon sent weapons to Israel in order to counter the Soviet resupply of Egypt and Syria. He saved Israel from extinction and is to be commended for this.

Because of the American rescue operation which gave Israeli a victory it would otherwise certainly not have had, the Arab nations of OPEC retaliated by refusing to sell oil to the United States. That caused oil prices to go through the roof, but the Arab embargo actually ended up a failure. Some historians claim that the embargo caused the stagflation of the ’70s, but that’s not true. Stagflation was on the rise as early as 1970 (see below), and it hardly even exacerbated the problem ; when people are under budget constraints, they simply spend less money on other things, lowering the prices of those items and thus keeping inflation in check. (What caused the stagflation of the ’70s was Nixon’s loose money policy which he continually urged on the Federal Reserve, on top of Lyndon Johnson’s sins now catching up — the massive spending in the ’60s on Great Society bills and the Vietnam War.)

Nixon should have ended the Vietnam War right away, but spent four years and 22,000 additional American lives (on top of the 36,000 who had been killed under Johnson) to get a peace settlement. And even as he winded down in Vietnam, he escalated the war in other ways — by bombing Cambodia and supporting a Vietnamese invasion of Laos, each without Congressional approval.

Because of Nixon’s abuse of executive power, Congress passed the War Powers Resolution in 1973, which required the president to (a) consult with Congress before sending troops into hostile situations, (b) notify Congress within 48 hours of committing such troops, and (c) withdraw the troops after 60 days if Congress has not declared war. [It’s fair to note that the War Powers Resolution was just as unconstitutional as Nixon’s secret war against Cambodia. The nation’s founders, at the Constitutional Convention in 1787, allowed the president as commander in chief to take certain levels of initiative, repel sudden attacks, etc., without always running to Congress for approval. The War Powers Resolution also undermined prior congressional approval of armed hostilities. It’s hardly a surprise that presidents since Nixon have flouted this resolution.]

As under Johnson, the Vietnam War was never really about Vietnam — a backwater country of no strategic value to the U.S. — but rather about showing off imperial power so as to deter Soviet involvement elsewhere in the world. Nixon’s prolonging/escalation of the war unfortunately brings down (dramatically) what could have been a stellar foreign policy record.

The good: environment, the arts, and some social programs

Though it galls and chafes liberals to acknowledge this, Nixon did more for the environment than any president in history. He created the Environmental Protection Agency (EPA) in 1970, and signed all of the following bills into law:

Nixon also created the Occupational Safety and Health Administration (OSHA), and beginning in 1971 he expanded national parks. He declared a war on cancer, signing the National Cancer Act (1971) into law, which provided funding for increased research into special cancers. He increased social security benefits for the elderly. Then, on top of all this progressive legislation, Nixon funded the National Endowment for the Arts (begun in 1965) more than Johnson had, and more than any subsequent president to date.

While some might decry all of the above as outside the purview of the federal government — indeed many of today’s Republicans would decry them as outright communistic — for me they are positives and to Nixon’s credit. Also worth noting is that Nixon proposed a universal medical insurance that provided even stronger coverage than Barack Obama’s Affordable Health Care Act. If that proposal had gone through, Nixon’s reputation today would unquestionably be that of a flaming liberal. (I have mixed feelings about what Nixon was proposing here, as I have mixed feelings about Obamacare.)

In 1971 Nixon collapsed the international money order by taking a radical step. He pulled America off what remained of the gold standard, which devalued the dollar in the extreme. To “solve” the situation he hounded the chair of the Federal Reserve (Arthur Burns) to massively expand the money supply, which created inflation. Unemployment was up to 6% in 1970, up to 6.2% in 1971. Nixon tried cutting taxes to help, but without cuts to federal spending, tax cuts mean nothing. By 1973 unemployment was up even more.

The high inflation caused by Nixon’s terrible money policies (on top of Lyndon Johnson’s spending sins) would hit the American people hard in the Ford and Carter years. Thanks to Johnson and Nixon, the American people got inflation, high interest rates, and high unemployment (stagflation) though none of that was Ford or Carter’s fault just because it was worse on their watch. The sins of Johnson and Nixon had snowballed in a way never seen before.

Nixon did right by African Americans. When he took office 80% of schools in the south were still segregated, and four years later (by 1973) only 8% of southern schools were segregated. He signed the Voting Rights Act of 1970, which nationalized the Voting Rights Act of 1965. The earlier act had been deviously constructed so that it only applied to a handful of southern states.

He also did right by the Native Americans, more than any president to date. Nixon endorsed a self-determination plan for the tribes, ended the policy of forced termination, encouraged the growth of tribal governments, and pledged to honor the government’s obligations to the tribes. Because of his activism Congress passed laws including the momentous Indian Self-Determination and Educational Assistance Act (1975). It was passed after Nixon left office, but its success depended largely on Nixon’s advocacy. More than any president, Nixon changed the course that had driven so many Indians into poverty.

Also to his serious credit, Nixon ended the draft, which had been in place since 1940, thereby removing the stain on a free society that forces people to enter a lethal occupation for little pay.

The bad: Watergate, the drug war

Watergate has defined Nixon and that’s not entirely unfair. Spying on his enemies was a serious offense because it undermined American liberty through the use of illegal tricks, misuse of security agencies, and obstruction of justice in trying to cover up crimes. He was rightly put under the process of impeachment for it.

Nixon was one of three presidents (four including Trump, at the time of this writing) who faced impeachment proceedings, but unlike Andrew Johnson and Bill Clinton, Nixon deserved it, and it’s no surprise he resigned before he could be officially impeached. Johnson and Clinton were acquitted by the Senate; all Johnson had been doing was appropriately defending the Constitution, and while Clinton’s lying under oath about a sex scandal was a crime, it was not a high crime or misdemeanor against the state warranting impeachment. Watergate undermined the Constitution.

Even worse than Watergate, however, is the war that Nixon launched on drugs. It’s still with us today, and obscenely criminalizes non-violent addicts (who need help, not jail) while causing violent criminals to go on parole in order to make room in prison for the drug offenders.

There is a lot of good and bad to weigh in Nixon’s score card:

Peace. Nixon was a beast in Southeast Asia (Vietnam and Cambodia), but that must be weighed against his excellent detente policy with the Soviets established via China, and also his rescue of Israel from a serious pounding at the hands of Egypt and Syria. I score him 8.

Prosperity. His horrendous fiscal and monetary policies must be considered alongside everything he did for the environment, cancer, the arts. I score him 9.

Liberty. For being the best president of all time for the Native Americans, wiping out school segregation, and ending the draft — and then for being a presidential criminal and launching the obscene drug war — I score him 11.