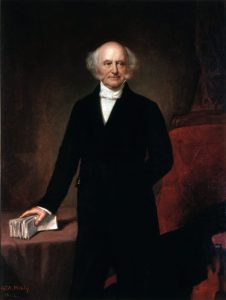 I am puzzled by the libertarian love affair with Martin Van Buren. There’s less to him than meets the eye. Most historians give him mediocre to poor marks, and here I agree with the mainstream. This despite my own libertarian leanings.

Jeffrey Rogers Hummel goes so far as to rank Van Buren the #1 president of all time. From “Martin Van Buren: The American Gladstone”, this is his verdict:

“The case for Van Buren’s greatness goes beyond his being the least bad US president. While avoiding foreign wars, he did more than maintain the domestic status quo. He reduced the power and reach of central authority in the face of stiff resistance and thereby helped the American economy weather one of its most severe deflations. He also brought an ideological clarity to American politics that has seldom been equaled. Although the Democracy would stray in significant and reprehensible ways from the principled course he had charted, his imprint still left an enduring legacy. The Democratic Party remained the political alliance with the strongest affinity for laissez-faire, personal liberty, and free trade until almost the turn of the century. All will acknowledge, I believe, that Americans once enjoyed greater freedom from government intervention than any other people on the face of the earth. For that accomplishment, Martin Van Buren deserves as much credit as any other single individual — and certainly more credit than any other president of the United States.”

Then there is Ivan Eland, who ranks Van Buren at #3 in Recarving Rushmore, grading him as follows:

These inflated estimations of Van Buren are way off base. The man was a rather dismal president when you get down to it. What Hummel and Eland call “avoiding conflict”, I call “leaving problems for other presidents to solve under worse conditions”. What Hummel and Eland think helped the American economy only helped so much, and brought its own problems. And if America was a bastion of liberty on Van Buren’s watch, it was only that for whites; Indians and blacks suffered unduly, even by 19th-century standards.

Evasion and avoidance (and war)

Hummel and Eland applaud Van Buren for avoiding war and conflict. He side-stepped war with Mexico, forgave Mexican debts, and refused Texas’s bid to be annexed after it became an independent republic in 1836. The president feared that admitting Texas into the union would exacerbate tensions between the north and south by bringing in a slave state; and Mexico would fight over Texas in any case. The problem with this logic is that annexation was foreordained at this point; the Texans wanted to be annexed; it was really just a matter of time. What Van Buren should have done is use the Mexican debts as a bargaining tool to annex Texas peacefully. By avoiding the problem and foolishly writing off Mexico’s debts, the eventual annexation (under John Tyler) led to the Mexican War (under James Polk), a horrible war which stirred up sentiments that made the Civil War inevitable.

Van Buren also diffused a potential battle with Britain over Canada. The British burned an American ship in 1837, and Americans retaliated by burning a British ship in 1838. Van Buren avoided war by a neutrality proclamation, and by soothing tempers on both sides, and disarming American hothead radicals crying for British blood. Van Buren should be given credit for all of this, but only so much, since his neutrality proclamation didn’t resolve anything. The border issue was left to a later president to resolve, which John Tyler did superbly with the Webster-Ashburton Treaty.

And if Van Buren avoided wars with Britain and Mexico in less than admirable ways, he pushed full steam ahead with the the longest, costliest, and bloodiest Indian war in American history: the Second Seminole War. Van Buren kept the war churning throughout his whole term, and this is where Hummel and Eland have to fudge (to laughable lengths) in order to score him so highly. This is what Hummel writes:

“No president can be perfect. Martin Van Buren’s most morally egregious and fiscally exorbitant compromises with government coercion stemmed from his faithful adherence to Andrew Jackson’s ruthless program of Indian removal. The second Seminole war, having erupted in 1835 prior to Van Buren’s inauguration, degenerated into a vicious and unrelenting counterinsurgency struggle that was still raging as he left office. President Tyler finally ended what had become the US Army’s most costly and lengthy Indian war with a proclamation in 1842 that permitted three hundred surviving Seminoles to remain in Florida on reservations, essentially the same terms that Van Buren had rejected in 1838.”

To pass over the egregious crimes against the Indians because “no one is perfect”, and then to call such an offender the #1 greatest president of all time utterly torpedoes Hummel’s credibility.

Eland has the same problem. He somehow wrangles a high peace rating (17/20) out of Van Buren’s mediocrity and war-mongering (maintaining peace with Britain and Mexico in average to poor ways, while waging unrelenting war on the Seminoles). It’s beyond me to make sense of this.

Hummel and Eland applaud Van Buren’s hard money policy, as do I. Andrew Jackson had left a mess: the Panic of 1837, which began only two months after Jackson left office. Thanks to (a) Jackson’s reckless bank war (in which he dispersed huge amounts of federal funds to his pet banks, which flooded the economy with a massive surplus and caused runaway inflation) and (b) his specie-circular executive order (which required that payment for the purchase of public lands be made exclusively in gold or silver), the country now faced the worst depression in its existence up to that point. Prices rose, businesses failed, bankruptcies were the norm, massive unemployment ensued, and people starved. There was a brief recovery in 1838, and then the panic resumed, running unrelieved from 1839-43.

Van Buren’s main counter to the depression was hard money. By restricting the supply, he dampened inflation and made the economic decisions of the private sector more predictable. It’s curious that historians often compare the Great Depression of 1929-33 with the deflation of 1839-43 — the two most most massive monetary contractions in American history, and which extended over the same length of time. But the similarities end there. Says Hummel:

“During the Great Depression, as unemployment peaked at 25% of the labor force in 1933, US production of goods and services collapsed by 30%. During the earlier nineteenth-century contraction, investment fell, but amazingly the economy’s total output did not. Quite the opposite; it actually rose between 6-16%. The American economy of the 1930s was characterized by prices, especially wages, that were rigid downwards, whereas in the 1840s, prices could fall fast and far enough quickly to restore equilibrium.”

In other words, things could have been far worse in the aftermath of Jackson’s sins. Van Buren’s hard money policy helped dam the disaster at least some.

More controversial is the Independent Treasury. Van Buren proposed the idea of an independent federal treasury — a “total separation of bank and state”, as he called it — which went into effect for one year (in 1840) before it was repealed; then it was later revived by President Polk in 1846, at which point it lasted until the creation of the Federal Reserve in 1913. According to Hummel, the Independent Treasury was the best banking system the United States ever had.

“Historians who dismiss the Independent Treasury as constraining the government ‘to accept payments and to make them in an antiquated medium’ more ‘suitable for the War of the Roses’ have never adequately explained the relative quiescence of monetary debates during its operation. The First and Second US Banks (1791-1811; 1816-1836) had divided political parties since the adoption of the Constitution. The Civil War’s national banking system and Greenbacks subsequently induced fresh convulsions over currency questions. If the Independent Treasury was in fact so obviously deficient, why did it provoke no similar political outcry? Moreover, its reenactment coincided with heavy expenditures for Polk’s war against Mexico, yet that military effort caused the economy less financial dislocation than any previous American war. During the nation’s next financial panic in 1857, the Treasury was effectively insulated from the bank suspension. There is also no evidence that the Independent Treasury hobbled the country’s economic growth.”

Eland, however, is more cautious, saying that “in the long term, Van Buren’s Independent Treasury had the effect of gradually centralizing financial power in the federal government, culminating in the Federal Reserve System — a quasi-central bank.” Eland does allow that the Independent Treasury was a better system than the two national banks that came before, and the Federal Reserve that came after… but it still wasn’t ideal.

The Indians and Blacks

If the Second Seminole War brings down Van Buren’s peace rating, the Trail of Tears all but kills his liberty rating. By Eland’s own admission, Van Buren set “shameful policies towards the Indians”, as he continued Andrew Jackson’s harsh policies on that infamous trail. Jackson had already sent most of the southwest Indians to the miserable territory in Oklahoma. The Cherokees had been able to delay their deportation, and now, on Van Buren’s watch in 1838-39, came the worst of the Trail of Tears. Thousands of Cherokees died on the march out west. I’m not saying that we should expect social-justice-warrior ideals from the 19th-century presidents; they must be weighed according to the standards of their day. But even by 19th-century standards the Trail of Tears was appalling.

For a northerner, Van Buren’s policies on slavery were too accommodating. To be sure, he wasn’t like the later doughfaces (Pierce, Buchanan) who went out their way to stick up for slavery, but he still left much to be desired. The real stain his record is the Amistad incident. In 1839 slaves owned by Spaniards seized control of the ship they were on (this was off the coast of Cuba), set sail for their African home, but winded up on Long Island instead. They were imprisoned in Connecticut, and Van Buren issued an executive order that the slaves be returned to the Spaniards. Some historians excuse Van Buren on grounds of diplomatic considerations, but that’s feeble, because the slaves were kidnapped from Africa illegally; the Spanish had broken international treaties against the slave trade. The Supreme Court correctly overruled Van Buren, freeing the Africans.

My scoring (26/60) doesn’t even come to half of Eland’s glowing tally of 54/60. Martin Van Buren was hardly an example of executive excellence.

So Martin Van Buren was better than his predecessor Andrew Jackson, whom I scored 18/60, but not by much.