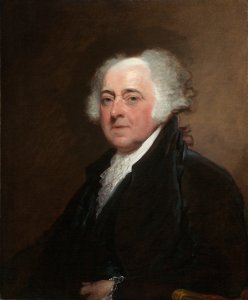 For reasons strange and hollow, John Adams has a favorable reputation among historians. The most recent C-Span Survey ranks him at #19, above over half of the other presidents. I’d place him in the cellar; probably in the bottom five.

To start with, Adams almost brought a ruinous war down on America. He’s usually given credit for avoiding that war with France, but it was he who stoked up the battle fever to begin with. There’s something seriously deranged with a leader who goes out of his way to provoke a nation like France into war, while placating Muslim terrorists in the Barbary States with tribute payments. By the end of his term, Congress was paying 20% of the US’s annual revenue to the Muslim pirates. Jefferson would commendably proceed to smash the Barbary pirates as soon as he took office, but Adams had always insisted on appeasement and allowing America to be bullied around by jihadists. While fanning the flames against the French.

By 1799 he finally wised up and sent a peace commission to France, reversing himself and obtaining peace. It was the right move, to be sure — the U.S. at this time was in no position to war against a nation like France — but a president gets minimal credit for making right what he himself put wrong. All he was doing was cleaning up his own mess.

And before he swept up, he committed some of the worst sins against liberty in American history. With hyper-fears of enemy Frenchmen and spies infiltrating American society, the Federalist majority in Congress passed four laws in June-July 1798, known infamously as The Alien and Sedition Acts. Adams enforced these acts with zeal. These acts:

That last one was an egregious violation of free speech. These so-called “security” measures were in reality domestic measures. Adams was just trying to insulate his Federalists and crush any opposition from the Democratic-Republicans. He punished journalists and others who spoke out against the government with huge fines and prison sentences. (Thomas Jefferson would pardon these people when he took office in 1801.)

Thomas Jefferson and James Madison protested the acts right away, and most of them were thankfully abolished when Jefferson took office in 1801. The third one, however, the Alien Enemies Act, is still on the books today; it was used despicably by Franklin Delano Roosevelt during World War II, leading further to the internment of Japanese American citizens, no less. The Alien and Sedition Acts were the second worst assaults on civil liberties in American history — the only greater ones coming from Woodrow Wilson’s crackdowns during World War I.

Before he left office, Adams did another stunt that presaged FDR. After he lost the election to Jefferson, he took the last month of his term to stack the courts with partisan (Federalist) judges. He put 16 new judges in the circuit courts, 23 justices of the peace in Washington county and 19 in Alexandria county — all Federalists of course. Adams burned the midnight oil, right up through the night before Jefferson’s inauguration, to get his new judges on board. These were the “midnight appointments”, as they became known.

Ironically, there was one good thing that came of this last-minute Federalist court-stacking: the appointment of John Marshall as Chief Justice of the Supreme Court. Marshall would hold this position until his death in 1835, and he shaped the court’s decisions like no other justice, guided by a strong conviction that the Supreme Court is the final arbiter in any Constitutional dispute. “It is emphatically the province and duty of the judicial department to say what the law is,” he said later in the famous case of Marbury v. Madison (1803). Our Supreme Court has functioned this way ever since, and that is as it should be. Contrary to what some Jeffersonians back then claimed (and what some libertarians today claim), Marshall wasn’t promoting a judicial supervision of society, far less advocating for what we today think of as judicial activism. He was mindful of the restraints on judicial power, and he insisted that the courts should fulfill a legal role, not a political one.

Aside from the appointment of John Marshall, just about every major thing Adams did was to the detriment of American citizens. Why he ranks well in expert opinion is beyond me.

My scoring for Adams is as follows. For pushing America to the brink of war with France, then barely saving the situation, and also for appeasing the Barbary pirates he should have smashed, he gets only 5 peace points. People weren’t terribly prosperous during his term; he had to create a heavy land tax on the American people to finance a military buildup that should not have been needed. 9 points for that category. His liberty rating would be an absolute zero (for enforcing the Alien and Sedition Acts, and for stacking the courts with partisan judges), but I throw him a couple of points for the appointment of John Marshall.

(His successor Thomas Jefferson rates much better, with a score of 42/60.)