This wasn’t a good year for movies. I can only recommend six. The worst film I saw was the over-hyped It, and I didn’t even bother with the Flatliners remake, which had a whopping 0% approval rating on Rotten Tomatoes during its first week of release. Blade Runner 2049 was the masterpiece, and mother! the hidden gem.

1. Blade Runner 2049. 5 stars. I was worried this would be another Mad Max: Fury Road, but not only does Blade Runner 2049 live up to its predecessor, it supersedes it. It’s a stunning visual aesthetic, and has the ambitious concepts of the original, taking them at the slow pace they deserve, so patiently that it feels like a ’70s film. I’m not surprised it bombed at the box office. Few people these days have the wherewithal — and by that I mean the intellectual wherewithal from above, and the physical fortitude from below — to sit still on their sweet asses for 2-3 hours and enjoy good artistry. The only problem are certain plot holes which leave coincidences unexplained. For example, from the start K is investigating the farmer replicant whose home supplies the clues for Rachael, while K already has memories implanted in him that relate to those very clues. But even here the plot holes seem more part of the overarching Blade Runner mystique. The best character is the hologram Joi, and she serves an oblique existential function: if software can fall in love and fear death, then the objection to replicants having these soul-like traits becomes even more strained. Her merging with the woman for K’s sexual pleasure is an incredible piece of choreography, as is virtually every other scene in this masterpiece.

2. mother! 5 stars. The reason people hate it isn’t because it’s a bad film, but because it was deceitfully marketed. Like last year’s The Witch, the trailer implied a more mainstream thriller. If you don’t like indie horror films that offend on the deepest levels, then avoid mother! at all costs. It’s about a man and woman in a countryside home, where the woman suffers intrusions from guests who gratify her husband’s ego. The intrusions get increasingly outrageous, until hell breaks loose — quite literally — and one critic has made an analogy with Mel Gibson’s Passion of the Christ, which suffocates the audience in torture to capture the immensity of Jesus’ sacrifice. mother! does a similar sort of thing to convey the “passion” of womankind, and the things they tolerate for the sake of men’s vanity. The indoor house becomes a battlefield of crazed strangers who commit unspeakable acts, and in the end seize the woman’s newborn infant, rip it apart into dozens of pieces, and eat it as if it were a sacrificial lamb. This is Aronofsky at his most audacious, but also at his best, and it helps that Jennifer Lawrence’s performance is so visceral and sympathetic.

3. Logan. 4 ½ stars. Like The Dark Knight this is a rare superhero film that’s excellent, which is a way of saying that it’s not really a superhero film. Logan is more like a post-apocalyptic western, inspired by the X-Men series rather than a part of it. The year is 2029, and Logan is trying to live a normal life in Mexico as a limo driver while taking care of Charles Xavier. Then a young girl shows up brandishing adamantium claws, evidently created to be a soldier like he was. She’s being hunted and Logan naturally wants no part of her until his heart wins out. (Heavy shades of Leon the Professional here.) The two of them proceed to slice and dice the baddies on a level of ultra-violence which has never been seen before in a superhero film. Logan is a masterpiece and the perfect farewell to this iconic X-Men character. 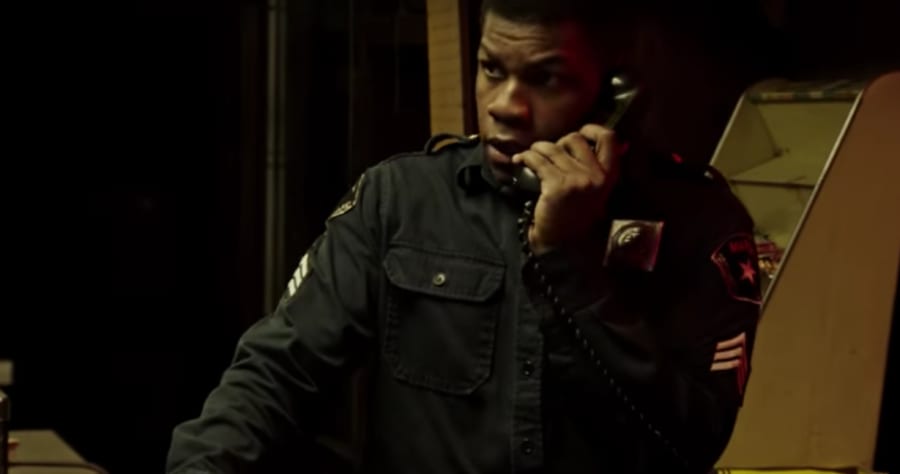 4. Detroit. 4 ½ stars. When Hollywood goes after racism and injustice, the end product is usually ruined by overblown sanctimony and high-horse preaching and mawkish conclusions. Kathryn Bigelow is a gifted director who eschews that nonsense, and — as in her Middle-East masterpieces The Hurt Locker ans Zero Dark Thirty — delivers a drama so unpleasantly real it needs no leftist screeds. The film is about the Detroit riots that took place in 1967, and focuses on an awful night during which innocent African Americans were terrorized in a hotel. The cops rounded them up and lined them against the wall, yelling at them, humiliating them, pretending to shoot some of them, really shooting others; all because someone in the hotel fired a toy gun out a window. The actor in the above photo does a particularly good job of portraying a security guard caught between his ethnicity and his job, as he tries mediating between the police and the suspects, and, predictably, earning hate from both sides for his efforts. True to life, the film ends on the court trial in which the racist cops were acquitted. I always look forward to Bigelow’s films, and her documentary-style realism is searing as ever.

5. Call Me By Your Name. 4 ½ stars. I wanted to rank this higher, to spite the idiots who are unable to handle eroticism between a 17-year-old and a 24-year-old. Some have actually accused this film of promoting pedophilia, which is not only nonsense but grossly irresponsible. You don’t have to be a troll like Milo Yiannopoulos to accept the huge difference between ephebophilia (sex with teens, which may be illegal, though not necessarily immoral, even when it violates age of consent laws) and pedophilia (sex with prepubescent children, which is plainly wrong). What happens between Elio and Oliver is neither illegal (the age of consent in the film’s setting is 16) nor immoral (since there is no manipulation or abuse of any power on the part of Oliver, the 24-year old). Sexual relationships that are outside societal comfort zones aren’t necessarily abusive — especially in our overprotective zones these days which condescend to 15-17 year olds as if they’re 10-12. Critics have praised Call Me By Your Name for every good reason. As a sexual coming of age story, it’s one of the most moving I’ve seen of its kind.

6. Get Out. 4 stars. As a rule I avoid comedy-based horror films, and I was even more wary of Get Out when I heard comparisons to Guess Who’s Coming to Dinner? Horror isn’t the place to preach about racism any more than it is to crack jokes. I was surprised on both counts. Not only does the humor work, the portrayal of racial tensions feeds directly into the plot — and that plot is a whopper — without sermonizing. A black college student visits the parents of his white girlfriend, who are liberal racists, the well-meaning kind who only think they’re colorblind. (Practically the first line out of the father’s mouth is a patronizing assurance that he “would have voted for Obama a third time”.) It turns out this family loves black people in a seriously wrong way: they have been kidnapping and lobotomizing African Americans out of “reverence” for them — turning them into household slaves, and even sex slaves. Get Out is a brutal satire on liberals who fetishize that which they admire, and is the film this year I was most pleasantly surprised by.