This continues my ongoing film-artists blogathon. Unlike most other directors, who have at least one or two stinkers to their name, Tarantino has never made a bad or even mediocre film. Even his worst (Kill Bill) is still very enjoyable.

1. Pulp Fiction. 1994. 5 stars. I count this among three films that profoundly educated me (the others being Blue Velvet and Eyes Wide Shut), showing me film’s potential to be art as much as entertainment. And in this case sickeningly hilarious. I laughed so hard I was choking when I first saw it, hardly believing what I was watching. Especially all the bickering and bitching (1) before stabbing the adrenaline needle into Mia’s heart, (2) after Vince accidentally blows Marvin’s brains out, and (3) around countless other scenes you can replay forever. The non-linear storytelling inspired a decade’s worth of lesser efforts; as with all masterpieces, filmmakers have tried to crack its code and harness its power, but of course there’s no skeleton key. You have to be Tarantino to write like this, and in the case of Pulp Fiction, every stroke of the pen was inspired by his magic.

2. Inglourious Basterds. 2009. 5 stars. After Pulp Fiction came a string of efforts that were certainly good but left an impression that Tarantino had only one masterpiece in him. Then came this. I’m generally no friend of cartoon villains, especially in brutal historical periods, so it’s all the more an indication of genius that Tarantino can use caricature to this level of effect. Landa is a brilliantly conceived Nazi you can watch all day; the Jewish Basterds a ludicrous wish-fulfillment fantasy who entertain as they self-indict. The film forces us to see ourselves as Nazis as we cheer the Basterds on for their inhumanities. And Hitler himself? His rant about the Basterds and Bear-Jew is more entertaining than the famously recycled scene from Downfall. As for the best scene, it’s the drinking game in the underground bar, which builds mountains of tension leading up to one of the best shoot-outs ever filmed. However, the first 25 minutes in the French hut is a close second; it could easily stand as a short on its own.

3. Django Unchained. 2012. 5 stars. Tarantino was born to revive the spaghetti Western. The Italians who made spaghettis weren’t trying to glorify the American ethos, and so the civilizing forces were often portrayed as corrupt, and the American frontier a place of devastation and racism. Django Unchained harks back to this effort of destroying frontier myths, especially that of southern hospitality and the genteel antebellum. It’s set in the years of 1858-59, when Mississippi plantation owners never dreamed their world was about to end. Tarantino runs parallel the realistic violence done to slaves with the cathartic violence of overblown revenge, a dualism that he has tamed to near perfection. I honestly don’t know whose performance I like better, Leo DiCaprio as the despicable plantation owner or (as my gut tells me) Samuel Jackson as his collaborationist slave, a cranked up Uncle Tom. Then there’s Don Johnson (another plantation owner) who gets in some of the most amusing lines, as he waxes wroth over a black man who dares to ride a horse.

4. The Hateful Eight. 2015. 5 stars. This is a bottle drama, slow burn, and murder mystery that eventually explodes in the expected Tarantino stew. Think Twelve Angry Men, except these eight angries will do exactly what Juror #3 pretended on Juror #8 with the knife. They are despicable killers trapped in a Wyoming roadhouse during a blizzard; only two are alive by the end, and even those two just barely. Some critics call this Tarantino’s most indulgent film, which it certainly is, but the indulgence works for rather than against, and I like it pretty much the same as Django. It’s the director at his most vicious if you can imagine it. There is some knifing commentary on race relations after the Civil War (it’s set in the 1870s), and the use of the female lead as a blood-drenched punching bag suggests that while men may be divided by racism, even the worst enemies will ultimately bond over a shared disgust of women. This is as nihilistic a Western you will probably ever see.

5. Once Upon a Time in Hollywod. 2019. 4 ½ stars. This love letter to Hollywood is one of Tarantino’s most emotionally honest films. Set in 1969 around the plot of a has-been actor, it revises events of the Manson family, so that instead of Sharon Tate getting killed, it’s the Manson killers who die when they decide to pass over Sharon Tate’s home and crash the home of the story’s heroes played by Leo DiCaprio and Brad Pitt. And do they die brutally: the slaughter that ensues is pure over-the-top Tarantino; one of the Manson sisters gets her face bashed and pounded in twenty times over; the other gets eaten alive by a dog and roasted by a flamethrower. But leading up to this twenty-minute end-game is a sprawling two-hour walk-though of late ’60s Hollywood, when spaghetti Westerns were becoming a thing and hippies were invading Hollywood. To think I was only four months old when the movie industry was like this.

6. Jackie Brown. 1997. 4 ½ stars. For many critics, like Jake Cole, this is Tarantino’s best: “This film, more than any other, speaks to the true artistry of Tarantino, not merely as a stylist but a moralist.” Jackie Brown says Cole, is nothing less than the key to unlocking a deeper appreciation of all Tarantino’s films. Its restrained approach underscores the implied commentary which is more obscured in the other uninhibited films. I could watch Jackie scheme with Max, and argue with Ordell, as often as the best scenes in the above four masterpieces. Tarantino says that those who call this his best film really don’t like his films at all, and he has a point; Jackie Brown is his only “realist” film which doesn’t take place in an absurdist alternate Tarantino-world. All the same, it is underrated, and I respect the reasons for which it is held in high regard by these claimants.

7. Reservoir Dogs. 1992. 4 ½ stars. Tarantino’s first film is identifiable as a first effort, though an exceedingly good one. Iconic scenes announce new measures of storytelling: the ear-slicing (unconventional violence), the petty bickering over who is Mister-Which-Color (hilariously organic dialogue), the main subject of the bank heist being kept off screen in favor of heated arguments over the pros and cons of tipping waiters (unconventional narration). It’s landmark game-changer, but it could have done more. It’s famously low budget, and so pretty much all the characters do is talk. Don’t get me wrong, that’s a refreshing antidote to standard action flicks, and of course I love dialogue-driven films. But the story of Reservoir Dogs seems to demand more supplements than, say, a pure bottle drama like The Hateful Eight. It’s in any case very hard to stop watching once you start.

8. Death Proof. 2007. 4 stars. He calls it his worst film, but I prefer it to Kill Bill. It may be his least ambitious, but for what it sets out to do, it does quite well. The tight structure is used shrewdly. The first group of women are killed in the death-drive so that we can experience the true horror of this homicidal maniac. The second group are the heroes for whom we constantly fear based on what happened to their predecessors. They turn the tables on this son-of-a-bitch with awesome ingenuity, and I have to say that some of their scenes are among Tarantino’s most entertaining to date. (Though one could say that about scenes from all his films.) The image of Zoe Bell clinging for dear life to the top of the car racing at 70 mph is one of those scenes that stays in mind forever. 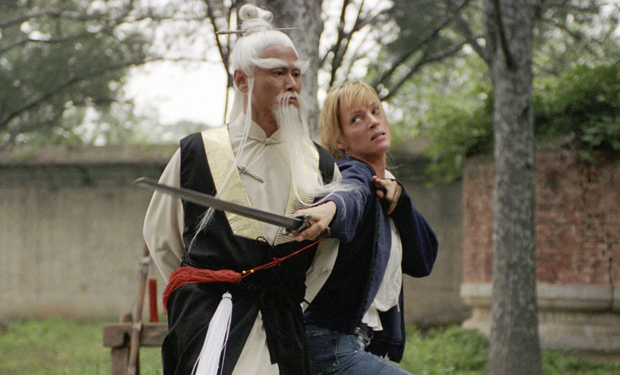 9. Kill Bill. 2003, 2004. 3 ½ stars. I’m not wild about revenge thrillers. It’s a hard genre to tame, allowing viewers full rein to their basest impulses in the most cliched ways. Art-thrillers like Hard Candy blur the moral compass so we don’t know how we’re supposed to feel about revenge, and someone like Tony Scott is avant-garde enough that he can get away with a film like Man on Fire. But those are rare exceptions. Kill Bill is exceptional too, granted, distinguished mostly by its colorful characters that only Tarantino could write. But in the end it is what it is: a woman who just wants to kill those who wronged her. The best scene in Volume 1 is the bloody showdown in the Japanese restaurant, especially the psychopathic 17-yr old Gogo, dressed in a high school skirt as she wields a meteor hammer with murderous precision; in Volume 2 it’s Beatrix’s merciless training under Pai Mei.