Listverse ranks The Top 10 Horrifying Moments in the Bible. It’s an excellent list, but I would switch out four entries and re-rank some of the remaining six. So here’s my official list of the Bible’s most horrifying parts. Some are also very powerful. I don’t intend the list as a negative take-down, even where it suggests that God’s will should be questioned if not rejected. 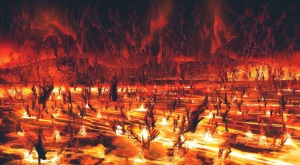 1. The Lake of Fire. (Revelation 19:20, 20:10, 14, 15) I can’t argue with Listverse’s top slot: God saves the worst for last. The end of the road is the unrestrained culmination of his wrath and hellfire: “God makes his final judgment for or against everyone who has ever lived. Some go to heaven, now called the New Jerusalem, with streets paved in solid gold, twelve gates made of single pearls, twelve precious-stone foundations for the 1,400-mile high, 200-foot thick walls. The rest are thrown into the lake of fire with the unholy trinity — Satan, Antichrist, and the false prophet — and burn for eternity.” The threat of hell is so cliche that it almost has no punch these days. But stop and think about burning in a lake of fire (the image on the right may help) without the reprieve of sleep or a coma, for literally billions of years. Horrors don’t get any worse.

2. Noah’s Flood. (Genesis 6:9-8:22) Listverse puts this at #4, but for me it’s a close second to the lake of fire: “This is the only time throughout history, according to the Bible, that God makes good on his threat to destroy the world. He sees that all men are evil all the time, taking to themselves such women as they please, without sanctity in marriage, without law, given to malice, sadism, hatred, and violence.” So he gives the world a righteous enema, and spares a single family who can preserve the animal creation and repopulate the world afterwards. Try to imagine a flood that buries the world’s highest mountains. That kind of an apocalypse is as terrifying, if not as searingly painful, as the one of fire and brimstone. 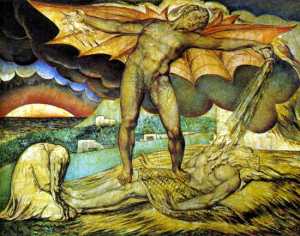 3. The Torments of Job. (Job 1-2, 38-42) Listverse puts this at #10. It should be way higher. I could even make a case for it at the top slot. Better yet, I’ll let Listverse make the case for me: “The entire Book of Job is one of the most uncomfortable lessons the Bible teaches, namely that God is in charge, what he says goes, and there is absolutely nothing any one of us can do about it, that we have precisely zero right to question him. God created everything in existence, including Job, and does not have to abide by the rules since he created the rules. God never gives an explanation for why he would allow bad things to happen to good people. The only ‘answer’ is quite scary: the reason you woke alive this morning and are still breathing is because of God’s beneficent mercy, a mercy he can take away at a whim.” Job is actually my favorite book of the Bible, but its message isn’t comforting.

4. The Passion of Christ. (Matthew, Mark, Luke, and John) Listverse ranks it at #2, and there’s no question it belongs in the top five: “Jesus was beaten until he was an unrecognizable bloody mess, crucified naked and then left to die. He died from a combination of cardio and pulmonary edema, dehydration, exsanguination, and shock. And he didn’t even do anything wrong.” Jesus’ death meant many things in early Christian thought — martyrdom, atonement sacrifice, sin-scapegoat, and ransom payment — which poses troubling questions about the nature of God. It implies that divine forgiveness can’t be free, that there must be give-and-take in the spiritual economy, and that Jesus’ pleading for humanity can only be effective after he is tortured and killed in a most agonizing way.

5. Jephthah Sacrifices His Daughter. (Judges 11:29-40) I’m not sure why this didn’t make Listverse’s cut. Apologists have argued against the plain meaning of the text, by claiming that Jephthah actually didn’t sacrifice his daughter: he dedicated her in lifelong service to the tabernacle. That theory is bogus. Jephthah indeed sacrificed his daughter, and he was a biblical hero. He wasn’t a Cain, or a Jezebel, or a Herod, or a Judas. If God didn’t approve his human sacrifice, He didn’t find it repugnant enough to blackball him. Jephthah — no less than Abraham — remained forever in the bosom of the Lord. Atheists and skeptics have a point when they brandish Jephthah’s sacrifice as something very ugly, just as apologists have understandable reasons for pretending the event didn’t happen.

6. “Smash their children’s heads against rocks, O Lord!” (Psalms 5, 10, 17, 35, 58, 59, 69, 70, 79, 83, 109, 129, 137, 140). At this entry I put the 14 imprecatory psalms. The verb “imprecate” means “to pray evil against”, or basically to call down calamity on people. Nowhere else in the Bible can you find this. There is plenty of nasty prophecy, but none of the prophets ever expressed desire for woe and destruction, only that such would come true if Israel didn’t shape up. The imprecatory psalms actually pray for God to harm and destroy people. To me, the most disturbing one is Pslam 137:9, which states, “Blessed be he who takes your infants and dashes them against rocks!”

7. The Seven Trumpets and Bowls. (Revelation 8:7-11:21, 16:2-21) Listverse singles out the fifth trumpet, which is admittedly a nasty horror show: horse-like locusts with human heads and scorpion tails pour out of the earth, and they torture and kill people for five months; then some angels kill a third of the earth’s population, which today would be two billion people. I include all seven trumpets/bowls together under a single entry, but if I had to single one out for special mention, it would be the fourth, which is basically global warming times a thousand. Humanoid locusts I could perhaps fend off with a weapon. The scorching sun of the fourth bowl would melt air conditioners. 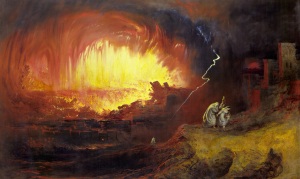 8. The Destruction of Sodom and Gomorrah. (Genesis 19:1-29) Listverse puts this at #7, which is about right. Whenever someone wished to speak of God’s bringing destruction upon the earth, the fate of Sodom and Gomorrah was very commonly cited as a model: “This is the prototype of the ‘fire and brimstone’ aspect of the Bible. We speak of this event solely in terms of the horror its witnesses must have experienced. Some analyses have theorized that the description of the actual catastrophe is a pristine account of a nuclear explosion. The Bible is clear that not a single person made it out alive except Lot’s family, saved by two angels.” On top of that, God killed Lot’s wife for daring to look back at the two filthy cities as she was fleeing. 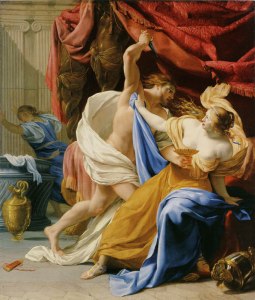 9. The Rape of Tamar. (II Sam 13:1-19) This is the sequel to II Sam 10-12, where David murdered a man and stole his wife. As a result, God’s wrath proceeds to steamroll over David’s entire family, and his daughter Tamar is the collateral damage. She is raped by her half-brother Amnon; she actively resists, struggles, and protests (II Sam 13:12-14) to no avail, and when Amnon is through with her, he discards her and contemptuously tells her to get lost (II Sam 13:15). This is worse than the rape itself: “Brother, this evil in sending me away is greater than what you just did to me” (II Sam 13:16). She is begging Amnon to marry her, since the only option left to a raped woman is to marry her rapist. No one respectable would have anything to do with a woman so dishonored. Women like Tamar pay huge prices for the sins of men.

10. Elisha and the Two Bears. (II Kings 2:23-24) This horror tale is under-appreciated. A crowd of children are bullying the prophet Elisha by making fun of his bald head. Elisha curses the little buggers in the name of God, who then unleashes a couple of she-bears on them. Forty-two kids are mauled and torn apart. See kids, don’t mouth off to the Lord’s prophets. There have been apologetic attempts to soften the story, by suggesting these weren’t really children, or that their insults cut deeper than jokes about a bald head, which are of course exceedingly lame.

4 thoughts on “The Most Horrifying Moments in the Bible”