I’m here to talk about The Day of the Doctor. About apocalypses and reset buttons. And about barns. But let’s get the praise out the way. Just about everyone has declared this the best anniversary special to date, and I’ll go even stronger: it’s not only the best multi-Doctor special in the show’s history, it’s the only good one. The Three Doctors (10th Anniversary, 1973), The Five Doctors (20th Anniversary, 1983), and The Two Doctors (1985), were nothing more than excuses to have the Doctor interact with his previous selves, in lame stories that didn’t hold up under scrutiny. (Those who defend these stories are presumably the same folks who adore fanwank like Journey’s End, which is actually even worse.) The Day of the Doctor is not only a good story, it’s a glorious one with plenty of solid thought behind it. Most significantly, it involves a reset that’s not a cheat.

Resets have been a major bone of contention throughout the new series, and I complain about them myself. But they can be very legitimate plot devices. Examples of good resets are found in Father’s Day and The Big Bang. Bad resets are in The Last of the Time Lords and The Power of Three. If you’re going to rewrite history, undo holocaust, and resurrect everyone (and everything) in the blink of an eye, you’d better do it right, and you’d damn well better supply enough payoff to compensate in other ways. Victory can’t be cheap; it has to cost. The Day of the Doctor costs mostly by way of the past. The Doctor has been drowning in moral guilt for seven seasons now. That’s a long time for us to be without Gallifrey, and a very long time for our hero to suffer as a monstrous war criminal. When he finally undoes his decision — when his Tenth and Eleventh incarnations persuade his earlier self that wiping out his own race doesn’t have to be the answer — the solution is shrewd, and it’s not as if everything is magically restored as it should be. We don’t know where Gallifrey is. It’s frozen in a moment of time, preserved and keeping the Time Lords alive, yes, but not so as anyone would know it. Least of all the three Doctors who will forget their group-effort reset as soon as they resume their timelines, thereby preserving history to the extent that in the past they will still believe they destroyed Gallifrey. In other words, the Doctor will suffer just as before. In his mind, he will have murdered his own race, because (in one timestream) that’s still exactly what he did. There’s your cost.

The time was ripe to bring back the Time Lords, and I’m anxious to see how they get unlocked. This is a reset I applaud without reservation. So let’s talk about barns.

The Doctors’ decision to commit mass destruction or not takes place inside a barn, of all places. What the fuck is a barn doing in Doctor Who like this? Is it just a random hide-away to agonize over a monstrous decision? Why not stay in the TARDIS? You can’t get more private and safely secluded than that. Why drag the Moment (the red-buttoned artifact of mass destruction) all the way through a desert… and into a barn?

It didn’t take long for me to register the barn’s symbolism, especially so soon after ranking the Narnian Chronicles. It comes from The Last Battle. It’s not nearly as blatant as Moffat’s Christmas special, The Doctor, the Widow, and the Wardrobe, but it’s still as clear as a bell. Both The Day of the Doctor and The Last Battle are about an apocalypse initiated inside a barn, where weird visions and harsh moral judgments unfold. The difference being that what happens in the Doctors’ barn saves Gallifrey from destruction (this time anyway), contra Aslan’s decision from within the barn to wipe out his precious creation of Narnia. In unmaking his decision, the Doctor has gone from being a proto-Aslan to an anti-Aslan figure. In other words, he’s become an anti-Christ of sorts, which could be a compliment in this case. He’s no longer a war criminal who commits genocide (on his own race) and xenocide (on the Daleks). He refrains from the mass destruction and hyper-justice demanded by apocalypses.

I wonder if anyone else has noticed this barn-apocalypse allusion. I haven’t seen any reviewer pick up on it, but I don’t believe for a moment that Moffat wasn’t thinking of the lion-savior Aslan. He’s used Narnia themes before and is well known for his stated intent to make Doctor Who into a “dark fairy tale”. You can’t get darker than The Last Battle. It traumatizes children and pisses people off to this day. But of course, that’s the nature of apocalypses. They’re morally frustrating like the Book of Job, and in Aslan’s case force point-blank questions about justice and fury.

We’ve certainly tasted moments of the Doctor’s own “feline fury” over the past seven seasons. Three particular moments stand out in this regard: (1) the Ninth Doctor in Dalek, when he’s about to obliterate the Dalek who is acquiring a conscience, and an appalled Rose barely succeeds in stopping him; (2) the Tenth Doctor in Waters of Mars, when he becomes a ranting megalomaniac and defies the laws of time for a supposed “greater good”; and (3) the Eleventh Doctor in The Beast Below, when he contemplates murdering a starwhale to everyone’s horror, and he bellows out in rage that no human being has any right to question his decisions. His baggage from the Time War overwhelms him in these cases (and actually defeats him in the second one, with no Rose or Amy to stop him), and I suspect we’ll see less lethal outbursts like these now that he’s finally made peace with himself. 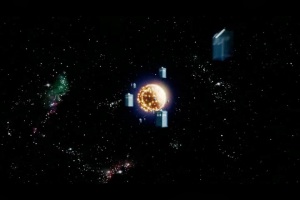 Let me close on a couple of side notes. As we all know, the War Doctor played by John Hurt was originally scripted as the Ninth Doctor, but Christopher Eccleston wouldn’t reprise his role. So Moffat came up with the idea of the “War Doctor”, an incarnation between #8 and #9, and we learn that it was he, not the Ninth, who destroyed Gallifrey in the Time War. This logically demands renumbering the Doctors, but fans are furiously debating this. For convenience sake, I do think we should keep calling Eccleston the Ninth, Tennant the Tenth, and Smith the Eleventh. But they’re not, and those who insist they are on grounds that the War Doctor doesn’t deserve a number because as a mass murderer he lost the right to the name miss the point. Incarnations have nothing to do with names and titles, and everything do with biology. Like it or not, John Hurt is now biologically the 9th Doctor, Eccleston is the 10th, Tennant the 11th, and Smith the 12th. Which means the Doctor gets only one more life — his final 13th to be played by Peter Capaldi.

And speaking finally of those thirteen lives — each of whom are being honored by this 50th anniversary special — the sudden involvement of all of them in the rescue operation was so splendid I wanted to cheer. The sight of a baker’s dozen TARDISes hurtling into the atmosphere of Gallifrey was more than a jaw-dropping spectacle; it was every bit necessary. To freeze and hide a planet this way would require a hell of a lot more TARDIS power than even three could provide. And speaking of a “baker’s” dozen, the surprise of Tom Baker in the epilogue was a delicious treat… with the camera winking at us through every line of hilarious bullshit implying that the Fourth Doctor actually lives on as a museum curator in London.

7 thoughts on “The Day of the Doctor: From War Criminal to Anti-Christ”