What a smashing year. No less than six of these films get 5-star ratings from me, instead of the usual one to three films.

1. Django Unchained. 5 stars. Tarantino was born to revive the spaghetti Western. The Italians who made spaghettis weren’t trying to glorify the American ethos, and so the civilizing forces were often portrayed as corrupt, and the American frontier a place of devastation and racism. Django Unchained harks back to this effort of destroying frontier myths, especially that of southern hospitality and the genteel antebellum. It’s set in the years of 1858-59, when Mississippi plantation owners never dreamed their world was about to end. Tarantino runs parallel the realistic violence done to slaves with the cathartic violence of overblown revenge, a dualism that he has tamed to near perfection. I honestly don’t know whose performance I like better, Leo DiCaprio as the despicable plantation owner or (as my gut tells me) Samuel Jackson as his collaborationist slave, a cranked up Uncle Tom. Then there’s Don Johnson (another plantation owner) who gets in some of the most amusing lines, as he waxes wroth over a black man who dares to ride a horse.

2. The Divide. 5 stars. It’s fascinating how this was made independently of The Grey (see below) and released the same time, neither having any knowledge of each other. Both are survivalist stories and both, weirdly, are tuned around haunting piano themes that recur at just the right moments. (Listen to The Grey’s and The Divide’s.) But where the former locates “evil” as external and impersonal (the cruel forces of nature), this one looks within. It’s set in the basement of a New York high rise apartment where nine strangers have gathered after a nuclear holocaust. They start out okay until cabin fever and radiation sickness — and their own base humanity — take over, and the cellar becomes a claustrophobic nightmare of torture, rape, sex slavery, and overblown lunacy. The Divide holds humanity completely captive to misanthropy; even I was deeply chilled by what Gens believes people are really like under our societal conditioning.

3. The Pact. 5 stars. This is way underrated. It’s about a haunted house but with a truly terrorizing twist. It turns out there is indeed a ghost in the house, but also a real-life psychopath living in the cellar, and he has been there the whole goddamn time. When you learn this and reflect back to the start of the movie when some of the “ghostly” assaults began — the open closet door, the jar of food on the floor, Annie being levitated and thrown against the walls, the other girls disappearing altogether — you realize that only some of this was the ghost. That’s frightening on many levels, and the sort of thing Peter Straub pulled off in his novel Lost Boy, Lost Girl, especially with the secret room with spyholes, and the room of caged torment. Psychopathic horror usually doesn’t scare me (classics like Psycho are suspenseful but they don’t give me nightmares), but McCarthy blends the psycho with the supernatural in ways that are unnerving in the extreme. 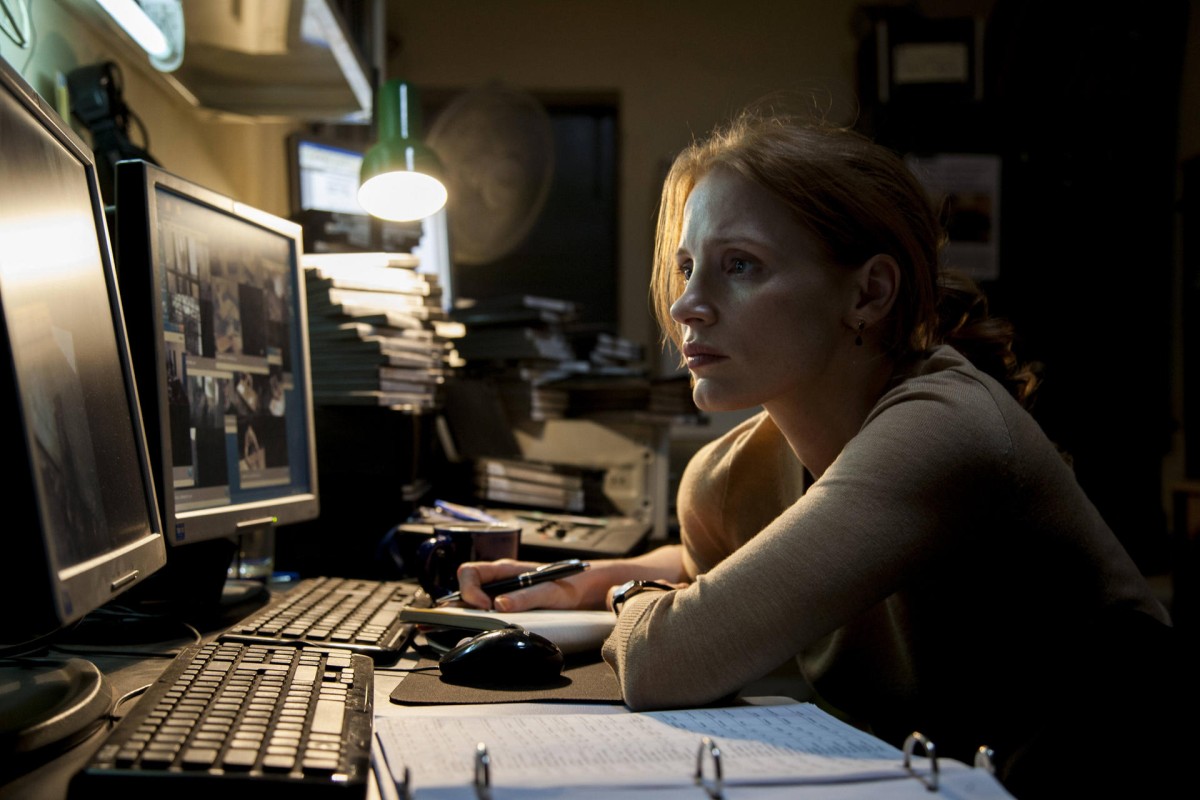 4. Zero Dark Thirty. 5 stars. Part of me is astonished by the vitriol being hurled at this film, but then nothing really surprises me anymore. After all, Spike Lee leveled ridiculous complaints about Django Unchained‘s supposed racial insensitivity, so it only follows that Zero Dark Thirty must be (wait for it) an apologia for waterboarding and other forms of torture used by the CIA in the days following 9/11. Nothing, of course, is further from the truth. The torture under the Bush administration is simply shown for what it is. It wasn’t the magic key to unlocking Bin Laden’s hideout, and even if it was, the film doesn’t imply that the ends would justify the means. By far the most impressive feature is Jessica Chastain, who since Tree of Life has become for me a new Cate Blanchett, an understated actor who compels with subtleties. Zero Dark Thirty is a lot like United 93, devoid of political bias and never preaching.

5. The Grey. 4 ½ stars. First things first: wolves are outrageously misrepresented in this film. In reality the poor things are wimps, so you need to suspend disbelief and just pretend this film takes place on an alternate Earth where wolves evolved with nasty temperaments more akin to grizzly bears. The distortion makes it feel more of a horror picture, which in many ways it is, like The Birds. Demonic wolves, like Hitch’s pterodactyl-birds, are effective devices in showing our helplessness against primal and savage forces. Like the great survivalist films rarely seen anymore, The Grey has the patience to let its characters breathe and become people we care about (an even more impressive feat given the rather unlikeable group aside from Liam Neeson) before they all go down in carnage.

6. Flight. 4 ½ stars. I wish there were more films where an opening scene of heart-stopping terror becomes the base for a slow-paced introspective character film. Washington plays an exceptional air pilot who is also an alcoholic, and on one of his typically drunk mornings suffers an aircraft malfunction but manages miraculous maneuvers and softens the plane’s crash landing. The genius of the film relies in putting the moral spotlight on his addiction even though it has nothing whatsoever to do with the plane crash, nor even the cause of the six deaths (out of 102 passengers). The story makes clear that if any other pilot had been flying, everyone would have died. Washington’s character must come to terms with his disease despite his savior-like status which only fuels his pride and denial and the horrible way he treats those around him.

7. Killer Joe. 4 ½ stars. It’s hard to watch some of the scenes in this sadistic black comedy, and trust me, I don’t squirm easily. Friedkin has made a raging comeback this past decade with Tracy Letts scripts (Bug was the other film), and I hope the two men continue collaborating. Killer Joe essentially functions as a parable of white trailer trash. Opposite ’80s films which saw hope in the nuclear family, this film kills that fantasy with cruelty, but with Fargo-like comedy so you get filthy sick laughing at things which are far from funny. The story: a gambler can’t pay his debts and so hires a hit man to kill his mother for insurance money; because he can’t front the advance payment, he loans Killer Joe his sister for sex; the mother gets bumped off, but it turns out she left her money to someone else; things careen out of control to an outrageous climax involving a forced blowjob with a chicken leg, and a brutally unforgettable “last supper”.

8. Perks of Being a Wallflower. 4 ½ stars. I was surprised by this one, expecting the cliches of high-school angst, but getting a genuinely moving drama about teen alienation. It’s amusing how David Bowie’s “Heroes” is used so effectively, despite the preposterous premise of kids so into alternative music like The Smiths never even having heard of the damn thing. But it’s the perfect tunnel song, because “Heroes” is as futuristic sounding today as it was back in the ’70s. And this is a forward-looking film, unlike so many teen flicks which savor the high school milieu. Charlie wishes he could fast-forward through his four years, and his senior misfit friends are just as impatient to graduate. Even the subject of Charlie’s sexual abuse as a child is treated well, sans melodrama.

9. The Imposter. 4 ½ stars. I’m still reeling from this one. It’s a true story about a young Frenchman who fooled everyone in America about his identity, and a sharp lesson about the power of deception — and self-deception. For a documentary it levels more suspense and thunderbolt twists than many fictional dramas. No one is saying anything bad about The Imposter, for the simple reason that there’s nothing bad you can say about it. It blends interviews, archive footage, journalistic reports, and in psychological-thriller fashion tells how a Texas child went missing then was successfully impersonated by the (much older) Frenchman. The hows and why’s of bamboozling the FBI and immigration officers are stunning enough, but the question as to how the boy’s own family could have accepted the impersonation is much darker… and not so cleanly resolved.

10. The Dark Knight Rises. 4 stars. The weakest entry in the Batman trilogy is still good, though I admittedly try to like it more than it deserves. Batman Begins was a drilling look at the hero’s origins, focusing on the politics of fear; The Dark Knight examined nihilism, destroying our hope through chaos. This third installment takes on the theme of pain, and not as profoundly as the other two. The problem with Bane is that he’s not autonomous like Ra’s al Ghul and Joker; in fact, he’s the former’s henchman, which reduces him in a major way. Still, he’s a fearsome piece of terror, and filled with an almost supernatural strength that crushes bones and (infamously) breaks Batman’s back. Certainly compared to most superhero films, The Dark Knight Rises is a work of art.