Here’s my revised pick list of Jesus books. Aside from the crown of Allison’s trilogy, they’re no longer rated in order of preference; the scholars are now grouped by theme. All have important contributions. Some are well acclaimed; others under appreciated. Neither John Dominic Crossan nor Tom Wright finds a home here; this isn’t a popularity contest, and who wants a historical guide polluted with egalitarian fantasies and apologetic whitewashes of Jesus’ delusions?

Dale Allison. Millenarian Prophet (1998); Resurrecting Jesus (2005); Constructing Jesus (2010). Allison grounds the deluded prophet in view of millenarian movements, outlining the characteristics of apocalyptic groups and cargo cults which happen to fit the Jesus movement like a glove. Against George Caird and Tom Wright, he shows that Jesus’ apocalyptic language, about which he was wrong, was intended literally. He locates Jesus as an ascetic (a celibate), a notion many people find as unattractive as eschatology, and more than most scholars allows Jesus his natural contradictions and inconsistencies. Jesus was strangely proclaimed to be risen from the dead, most likely on account of the empty tomb in conjunction with visions, since the disciples would have otherwise had no reason to revise standard Jewish beliefs about resurrection. As egocentric as it seems to us, Jesus had exalted thoughts about himself and embraced martyrdom. He may have even thought he had a heavenly alter-ego: the Son of Man. Allison’s trilogy adds up to the finest and most persuasive work on the historical Jesus to date. 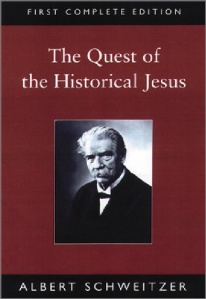 Albert Schweitzer. The Quest of the Historical Jesus (1906). Who isn’t chilled by the famous conclusion, “He comes to us as one unknown”? Hopelessly dated (most of Schweitzer’s targets are straw men by today’s standards), like Jesus himself, this classic won’t let us go, its influence simple and direct. It’s a delight opening the book to a random page; reading the prose is like savoring Glenlivet: “As of old Jacob wrestled with the angel, so modern theology wrestles with Jesus of Nazareth and will not let him go until he blesses it — that is, until he consents to serve it and suffers himself to be drawn into the midst of our time and civilization. But when the day breaks, the wrestler must let him go. He will not cross the ford with us. Jesus of Nazareth will not suffer himself to be modernized.” Schweitzer’s classic remains the most brilliant and poetic indictment on a plague that always comes back in every era of Jesus studies.

Pieter Craffert. The Life of a Galilean Shaman: Jesus of Nazareth in Anthropological-Historical Perspective (2008). Pleading that scholarship is everywhere methodologically flawed, and rejecting both postmodern and positivist approaches, Craffert uses cultural anthropology to reframe questions. He locates the Galilean not so much “underneath” the gospel traditions as “in” them, and finds a shaman who entered altered states of consciousness (spirit/divine possession, ascents to heaven, etc.) in order to heal, prophesy, and control spirits. Across cultures, shamans have assumed the multiple roles of prophets, healers, and sages, enjoined on them by their communities. Their exalted roles owed to personal intimacy and encounters (as they understood them) with their deities, and were not a mark of egocentrism. Craffert’s anthropological framework is the most useful in understanding Jesus as an “alien other” who did peculiar things in the context of visionary possession states.

William Herzog. Parables as Subversive Speech (1994); Jesus, Justice, and the Reign of God (1999). Herzog sees Jesus as a threefold prophetic type. (1) A popular prophet who attracted crowds with the power to heal and an ability to outwit opponents in challenge-and-riposte; as a low-life artisan with no ascribed honor, Jesus acquired honor by these means: exorcist-healing and shaming his rivals with counterquestions, rhetoric, insults, and scriptural one-upsmanship. (2) An oracular prophet who leveled social critiques through the veiled transcripts of parables. (3) A Deuteronomic prophet who critiqued the Torah while upholding it at the same time, primarily by playing the debt codes off the purity codes. Herzog explores a different way of understanding Jesus’ eschatology, and while he ultimately fails to convince on this point, there is some helpful discussion about the way peasants could perceive time in more cyclical than linear terms. Herzog’s work represents the best comprehensive examination of Jesus as the product of an honor-shame culture in the Jewish prophetic tradition.

E.P. Sanders. The Historical Figure of Jesus (1993); Jesus and Judaism (1985). Sanders’ robust scholarship situates Jesus as a Jew of the first century rather than a Protestant born out of time and place: an eschatological prophet, obedient to the Torah, ultimately killed for acting against the temple in his belief that God would soon destroy it and raise another in the kingdom of God. Sanders sees most of the gospel reports of Jesus’ conflict with the law as inventions used to vindicate the later Gentile mission. To an extent he’s probably right. It’s hard to believe that Jesus dispensed with some parts of the Torah as reported, since the disciples later had to struggle precisely with these issues; and Paul was unable to cite Jesus’ supposed pronouncements on the matter (save in the case of divorce). But it’s also hard to believe that all of Jesus’ alleged custom-breaking behavior reflects later development. Sanders represents the best attempt to ground Jesus within a framework of covenantal nomism.

John P. Meier. A Marginal Jew: Rethinking the Historical Jesus (1991, 1994, 2001, 2009, 2016, ?), 6 vols. This massive six-volume series (the last still on the way) is the best reference source on the subject. Meier hypothesizes an “unpapal conclave” consisting of a Catholic, Protestant, Jew, and agnostic who must reach a consensus about Jesus — an even-handed if not exactly ideal way to reconstruct a figure of the past. For the task at hand, it works reasonably well, because this is more a reference tool for the Anchor Bible series than an autonomous work. While Meier certainly advances his own portrait of Jesus (a cousin, in many ways, of Sanders’ figure) it is exceedingly cautious and qualified with copious references and footnotes, weighing the pros and cons of rival theories. Meier’s project is an exhaustive, objective portrait of Jesus which employs the (problematic) criteria of authenticity as best as humanly possible.

Maurice Casey. Jesus of Nazareth: An Independent Historian’s Account of his Life and Teaching (2010); The Solution to the Son of Man Problem (2007). Casey’s work offers a cousin of Sanders’ prophet while delving more deeply into sayings, deeds, Torah disputes, Christological titles, and martyrdom issues. His command of Aramaic helps solve the “son of man” problem, particularly by making sense of both an idiomatic and general use of the term. Unlike Sanders and Meier, he takes seriously the pervasive testimony that Jesus’ conflict with Pharisees was enough to be terminal, though also insists that Jesus never actually broke the law. His chapter on healings and exorcisms is one of the best available, and his view that Jesus expected to suffer an atoning death refreshing. While his defense of a completely Torah-obedient Jesus (even in the cases of “let the dead bury the dead” and the prohibition of oaths) isn’t always convincing, and the early datings of Mark and Matthew just wrong, the end result is a decent portrait. Casey’s is in fact the most impressive defense of a halakic Jesus. 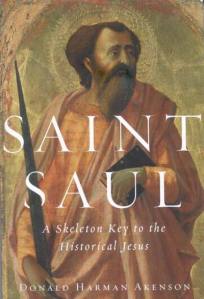 Donald Akenson. Saint Saul: A Skeleton Key to the Historical Jesus (2000). A highly polemical book that insists Paul knew more, cared more, and can tell us more about the historical Jesus than the late and unreliable gospels. As a pre-70 writer Paul is a goldmine; we just have to read him in slant. Akenson sees a key to unlocking Jesus in Paul’s “imitation of Christ”: his mission to the Gentiles being a simulacrum of Jesus’ to the people of Israel. The contours of Paul’s life mirrored those of his savior: poverty, celibacy, itinerancy. Both the Galilean and Diasporan were martyred for breaking Jerusalem Rules. Like most apocalyptic figures, they had wild ideas, and the wilder the ideas, the more shrewdly they were able to justify them by scriptural revision. Akenson makes plain that a sharp distinction between Paul’s heavenly Christ and the synoptic earthly Jesus won’t do.

William Arnal. The Symbolic Jesus (2005). Don’t be fooled by the size; there’s substance in this tiny book. And don’t be surprised that it doesn’t advance a portrait of Jesus; Arnal thinks the quest should be abandoned, for “ultimately, the historical Jesus does not matter”. Even if he’s wrong about that, he’s at least right that we don’t need Jesus or his Jewishness to feel good about ourselves. That’s what the book is about: the loaded question of Jesus’ Jewishness; oblique agendas; post-Holocaust biases (resulting in a Jesus who approaches a stereotype of modern Jews); the need to preserve religiosity (a Jesus who believed in Torah, temple, and purity is a bedrock of stability and weapon against the secular erosion of social identity), etc. Arnal’s book is in fact the most important look at agendas since Schweitzer, exposing why scholars want so badly to believe in a Jewish Jesus.

Richard Carrier. Proving History (2012); On the Historicity of Jesus (2014). Last but not least: the case for no Jesus that should humble historicists. Carrier assesses the NT traditions and non-biblical evidence against a convincing tableau of Jewish and pagan syncretism, and pegs the early Christians as cargo cultists. He argues there was never a man named Jesus who acquired followers in an earthly life and was executed (or believed/claimed to be executed) which in turn led to his status as a divine Christ. Jesus began as a mythic deity who went through incarnation, death, burial and resurrection all in the supernatural realm, and the gospels later gave this figure historical life. Carrier estimates the probabilities of evidence on both mythicist and historicist assumptions, weighs the two, and in the end finds the likelihood that Jesus existed an insignificant .008% (or, being generous as possible, 32%). His key chapter on Paul presents an alternative to the usual apostle we think we know, and you can’t help but envy the interpretations even if you disagree. Carrier shows that Jesus-mythicism is a viable theory after all.