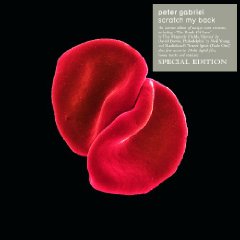 Peter Gabriel’s first studio album in eight years, Scratch My Back, is the first half of a joint effort in which the most talented rock musician of the last three decades reinterprets songs of his favorite bands. In exchange, these artists — David Bowie, Paul Simon, Elbow, Bon Iver, Talking Heads, Lou Reed, Arcade Fire, The Magnetic Fields, Randy Newman, Regina Spektor, and Radiohead — will be returning the favor. On a forthcoming album called I’ll Scratch Yours, they’ll perform some of Gabriel’s songs.

The JamsBio reviewer’s reaction to Scratch My Back is the same as mine:

“Rather than putting his typical percussion-heavy, rhythmically inventive spin on these songs, Gabriel performs them here backed by just an orchestra. No percussions, no guitars. The old maxim says that a song can only be considered great even if it sounds great when performed with just acoustic guitar or piano. But Gabriel goes for the counterintuitive approach here; he’s out to show the beauty of these songs by removing them from their familiar settings and pumping up the majesty. When this approach works, and it does more often than not, it’s revelatory…

“When his voice soars from humble murmur to impassioned bellow, as it seemingly does at one point on every song, it brings chills every time. While I wouldn’t dare to say that Gabriel improved on any of these songs, I feel like he definitely brings some new perspective to them, which, considering their quality and popularity in their original versions, is quite the achievement. It also makes me wonder if these artists so diverse and talented can rise to the occasion when they cover Gabriel’s music in an upcoming release.”

The special edition of the album is available on iTunes, so don’t wait any longer to buy it!