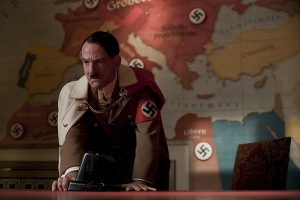 Quentin Tarantino is back — and I mean the old Tarantino who showed how excessive dialogue can be so wildly entertaining, characters most impressive when sophisticated, bad-ass, and absurd all at once, and in general how to make cinematic art out of the preposterous. Inglourious Basterds is easily his best film since Pulp Fiction, and I agree a masterpiece, as the director hubristically proclaims through the mouth of his lead character at the end. Whether or not it tops Pulp Fiction I can’t yet decide. That will take some distance and another viewing.

Keep your judgment in check as I describe the film’s twin plots, which on the face of it are laughable. A group of zealous Jewish Americans (the Basterds) are on a mission in Nazi-occupied France to kill and scalp as many Nazis as possible. A Jewish woman fleeing the Gestapo comes to Paris, and assumes management of a theater which will eventually be visited by all the top echelons of the Third Reich, including the Fuhrer himself. The Jewish woman and the Basterds, unaware of each other’s existence, come up with independent plans to take out Hitler and his cronies on premiere night. Not all goes according to plan for either party, though the Nazis do end up getting their just deserts in an apocalyptic conflagration. Trust Tarantino to flesh all this out with good story. 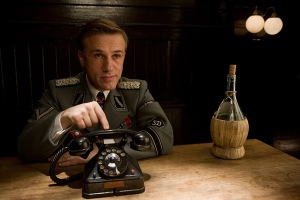 Special mention must be made of Christoph Waltz who plays the ferociously shrewd “Jew Hunter”, ferreting out Jews who hide under floorboards, interrogating suspects with disturbing but enjoyable wit. I come close to putting Waltz’s performance on the same level with Anthony Hopkins’ portrayal of Hannibal Lecter and Heath Ledger’s Joker. He’s that memorable: evil, mannered, and ludicrous all at once, the perfect villain for a Tarantino film.

On Tyler Williams’ Facebook page there’s been some discussion about the film’s moral cash value. I join the opinion that it’s not a redemptive violence movie. Unlike Pulp Fiction, Basterds doesn’t use violence to reach for something higher as much as it holds a mirror to ourselves. Commenter Mike Perschon notes that Nazi horrors are largely absent from the film, focusing instead on atrocities committed by the Jewish “Bastards” (Eli Roth’s gleeful bashing of a Nazi officer’s head with a baseball bat is a memorable spectacle), and that we’re perhaps even meant to identify with Hitler and his cronies as they sit in the theater thrilling to the Nazi premiere in which their “enemies” are being slaughtered on screen.

Tarantino’s films are only obliquely moralistic in any case. What he wants above all is to entertain and make us laugh our asses off at things that are normally far from amusing. “You name me any horrific thing,” he once told Charlie Rose, “and I can make it funny.” The way to do this, as I think he’s done so well, is by embracing irony, a certain level of nihilism, and just plain bizarreness, irrespective of how that formula may offend. To this extent I agree with Carson Lund, who writes that

“The film’s bizarreness, conceptually, is central to its success or failure. On one end of the stick, this blueprint, which treats the Holocaust with lighthearted, playful vengeance, is sure to offend many, while on the other, you have to appreciate Tarantino’s willingness to upend the conventions he’s working under, and his ability to provide a consistent air of comedy to a topic that is most typically portrayed with grave solemnity. I believe in the latter, because I prefer not to let morals or proper manners get in the way of a film’s integrity as a film.”

Allowing any moral compass to interfere with artistic integrity is a plague on filmmaking, and one need only think of the outrage against Mel Gibson to see how certain sensibilities hindered a proper assessment of his passion film. Gibson himself may well be anti-Semitic, but his film is not. No one thinks Tarantino is anti-Semitic, but neither should his film be judged as insensitive for supposedly trivializing the Holocaust tragedy. It’s not disrespectful, but oddly the opposite.

The film is a must see, and Tarantino fans will be ecstatic.

5 thoughts on “One Bastard of a Movie”