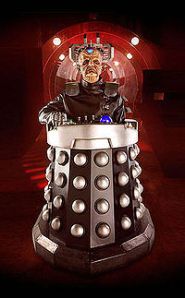 The Stolen Earth/Journey’s End goes down as the worst story of the entire new series. There was nothing good about it; nothing at all. The Dalek Supreme was impotent, and for the first time in any Davros story, I didn’t feel like the Daleks’ creator was a serious threat. The Daleks were disposed of far too easily and cheaply, with a cloud of last-minute, deus-ex-machina technobabble.

It was one cop-out after another. I knew the regeneration would be bogus (and that it would lamely involve the Doctor’s right hand) but it could have been sidestepped with more creativity than that! The Doctor-Donna business DIDN’T. WORK. AT. ALL. Donna as a motormouth Time-Lord was as offensive as the fishwife Donna from The Runaway Bride, and I completely lost the empathy I’d built up for her over the entire season. We didn’t even get to see the Daleks exterminate anyone, save the indestructible Captain Jack.

Rose (like all the other returning companions) had virtually nothing to do, and the epilogue at Bad Wolf Bay made a complete mockery of her series-two swan song. As if things couldn’t get worse, the Doctor double was the lowest point of all, and the fact that’s he’s half human was horribly contrived to provide the cheap fairy tale ending at Bad Wolf Bay. Rose gets her Time Lord lover after all. Good night.

Donna’s fate was tragic, but I was unable to appreciate it because my emotional investment in the character was completely shattered in this story (so I just didn’t care), and also because it was really a cop-out masked as tragedy. We have Dalek Caan repeatedly promising that one of the Doctor’s companions would die, but the “death” turns out to be a figurative one (a memory wipe, and loss of her quasi-Time Lord status). This kind of maneuver worked once (for Rose at the end of season two, when she went to the parallel world and people from her world believed her to be dead), but not here. At this point it’s become a transparent formula for jerking us around.

Honestly, if Russell Davies is going to trap the Doctor’s best companion in a parallel universe and say she’ll never see the Doctor again, he should have the balls to follow through with that. If he sets us up with repeated predictions about another companion dying, he should bloody well have the stones to kill someone. Does he think we’re all five-year olds who can’t handle good storytelling? Classic Who never copped out in so many ways; never pulled punches with body counts; never betrayed the audience so aggressively in every other frame.

The Den of Geek review gets it right with a comparison to the Superman films:

“If the ending of The Last Of The Time Lords was from Superman (with everything being rewound, and the reset switch being flicked), this was straight out of Superman II, as the Dalek’s weapon was inevitably concentrated on themselves. Had Russell T. Davies stayed on for another series, then I’d dig out my copy of Superman III right now and save myself the bother of writing the end of series review in two years’ time. Combined with the bizarre sight of the Tardis pulling, well, an entire planet, it wasn’t anywhere near what last week had been tempting us with. That’s being a little kind.”

You better believe it. It’s impossible to be too harsh with this finale.

It’s important to go out strong, and Davies was able to do that in series one and two. He failed miserably in series three, and ten times as horribly in this one. Godspeed and good riddance, Russell. It’s time for new blood.