Almost 50 years after Morton Smith’s “discovery” of Secret Mark in 1958, Stephen Carlson has put the hoax to rest. His case against Smith is strong enough to be deemed conclusive, and can be summarized as follows.

* The author of Secret Mark must have read James Hunter’s novel, The Mystery of Mar Saba, published in 1940. Philip Jenkins first made this connection in 2001, and I’m sure that if it had been made back in the 70s, a lot less people would have been duped. The novel is about a forgery at the Mar Saba library, exactly where Smith “discovered” Clement’s letter. Furthermore, as Carlson notes, both Secret Mark and the novel’s fictional discovery reinterpret a resurrection account from the gospels in naturalistic terms.

* The letter to Theodore sounds hyper-Clementine, as if someone went out of his way to mimic Clement (argued at length by Andrew Criddle in 1995).

* The letter conveniently goes out of its way to authenticate Secret Mark, identifying the author Clement, who in turn vouches for Secret Mark’s authenticity; and his full citation of Secret Mark is unnecessary and gratuitous for the concerns he is supposedly addressing (pointed out by Charles Murgia back in 1976).

* Smith published a paper — right before his discovery of Secret Mark — in which he connected both Clement of Alexandria and “the mystery of the kingdom of God” (in Mk 4:11) to sexual immorality (in T. Hagigah 2:1), which, of course, is exactly what Secret Mark is all about. Amazingly, no one ever picked up on this before Carlson.

* Smith deliberately planted three confessions which reveal himself to be the author of Clement’s letter:

(2) Morton Salt — the company which invented the kind of salt presupposed in Clement’s letter.

(3) Jesus’ gay affair — with the young man later seen in Gethsemane, where Jesus was arrested, thus evoking the cultural milieu of America in the 1950s, where police were cracking down on gay men who met in public parks and gardens.

Identifying these signature-confessions constitutes the bulk of the book, and it’s brilliant detective work on Carlson’s part. When taken in conjunction with the rest of the damning evidence, forger’s tremors, and convenient “coincidences”, they suffocate Smith’s hoax once and for all.

Carlson insists on distinguishing hoaxes from forgeries, and believes that associating Secret Mark with the latter has hindered a proper understanding of what Morton Smith was really up to. While I certainly think Secret Mark can be called a forgery, I appreciate Carlson’s concern about motive. He’s essentially right: Smith didn’t fabricate Secret Mark to support his academic theories; he wanted to test his colleagues with an elaborate prank. Secret Mark belongs in a category of hoaxes which include the Ern Malley Poems, Alan Sokol’s postmodern hoax, and the play by Sophocles really written by Dionysius the Renegade. In this sense, in terms of motive, it’s quite different from forgeries like Macpherson’s poetry, the Hitler Diaries, or Ireland’s Shakespeare play.

I agreed with what Donald Akenson wrote in Saint Saul five years ago in 2000: it doesn’t take a specialist to spot the fakery in Secret Mark. But it did take an expert like Carlson — a legal expert, not surprisingly — to prove it. 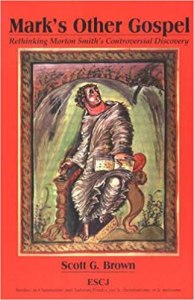 Revisiting Scott Brown’s book, therefore, six months after its publication, is rather painful now that Carlson has crushed all doubts. Mark’s Other Gospel is so diligently argued, carefully considered, and plausibly sounding at times, that one could almost believe it describes the hermeneutical intent behind an ancient document. Brown’s thesis is that Secret Mark was part of a longer version of the gospel of Mark, written by the same author, but for advanced readers who might have a more gnostic understanding of the first version. Longer Mark elaborates themes of discipleship and Christology already in place, especially elements which were left ambiguous or obscure in the shorter version, like the mystery of the kingdom of God (Mk 4:11) and the appearance and flight of the young man in Gethsemane (14:51-52). Brown even suggests that Secret Mark is an actual parable of the kingdom:

“As an enacted parable of the kingdom, the raising of the young man…illustrates the paradox that one must undergo death in order to defeat it. The private explanation of this parable [where the young man spends the night with Jesus] expounds this insight by using baptismal imagery of death and rebirth [naked under the linen]… Baptism imagery is used here to interpret the salvific dimension of the young man’s rising according to the analogy of dying (drowning in water) and rising again, though the baptism by which the transformation is attained is not the rite itself, but a metaphorical immersion in literal suffering and death.” (p 206)

While Morton Smith is laughing from the grave, it would be a mistake to dismiss Brown as a fool. By all indications, he’s a qualified scholar who knows his stuff (though Mark’s gnosticizing of his own gospel is rather hard to take seriously). Even the best can be taken in by hoaxes, and in fact, I wasn’t sure how to rate this book. Does it deserve a bottom-barrel one-star rating for building a theory of gospel origins on a prank? Or is it valuable for precisely this reason, as an illustration of academic credulity in the context of a wider hoaxing phenomenon?

Brown would find neither flattering, so I should point out some decent things about the book, especially in terms of what it argues against rather than what it argues for. Brown points out considerable problems with ideas that Secret Mark was part of an early version of Mark, part of a secret and elitist gospel, or was used for purposes of pre-baptismal catechism. He’s also right about certain scholars who have dismissed Secret Mark as a hoax for the wrong reasons — whether out of prejudice or malice. In particular, he scores zingers against Jacob Neusner, who clearly maligned Smith out of spite, owing to the infamous fallout between the two men. It’s embarrassing to see Neusner’s pre-’84 and post-’84 remarks laid out on the same page, as he went from Smith’s “brilliant account” of a discovery which “ranks with Qumran and Nag Hammadi, Masada and the Cairo Geniza, but required more learning and sheer erudition than all of these together”; to Smith’s “forgery of the century”! (see pp 39-40).

Mark’s Other Gospel is ultimately the tragic product of a scholar who ignored (or couldn’t see) the humor in Secret Mark. That it’s the most ambitious treatment to date only accentuates the tragedy. Perhaps this serves all the more as a lesson to us, in the wider context of literary hoaxes and forgeries.